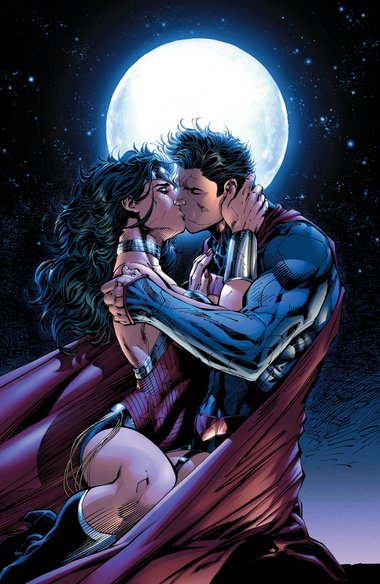 Well, another power couple have locked lips and the result may be nothing short of earth-shattering. No longer relegated to the sidelines in this Summer filled with Batman and Spider-Man hoopla, Wonder Woman and Superman have hit the headlines with a snogging session that has turned the super-hero universe into a flutter - or at least some raised eyebrows and a little good-old fashioned gossip. Could their off-screen romance some day even make it to the big screen?

The smooch took place in the final throes of issue No. 12 of  DC Comics' year-old Justice League series which introduced new stories, costumes and even origins of the members of this longstanding super posse.  (The publisher introduced the Justice League of America as they were called then in 1960, three years before rival Marvel unveiled its equivalent, The Avengers.)

DC Comics co-publisher Jim Lee told A.P. via ABC News that the kiss is not a "stunt or an alternate reality smooch."

"This has been in the works for some time and we certainly wouldn't have pulled the trigger without there being great creative benefit to the liaison," he said in an email to A.P. "Beyond the joy and sorrows of new love, there are potentially huge ramifications and dramatic ways this single relationship between these iconic characters will change the entire political and interpersonal landscape of the DC Universe."

All of that from a kiss? What happens when they finally hook up?

This is not the first time the super-hero power duo have had a fling, by the way. In the '80s they had a short-lived moment of passion, but Superman ended up with Lois Lane. They also canoodled in Frank Miller's Dark Knight Strikes Again a decade ago.

Beyond the smooch heard around the world, Wonder Woman has some other news to boast since her last foray into the headlines. Her costume has changed and she is now the daughter of none other than that zenith of Greek Mythology, Zeus. You go grrrl!

Given Hollywood's penchant for hot power couples and the lure of box office dollars that often follow super heroes generally, when will Wo-Supe (or maybe it's Super-Wo?) share that kiss on the big screen? Tell us what you think....