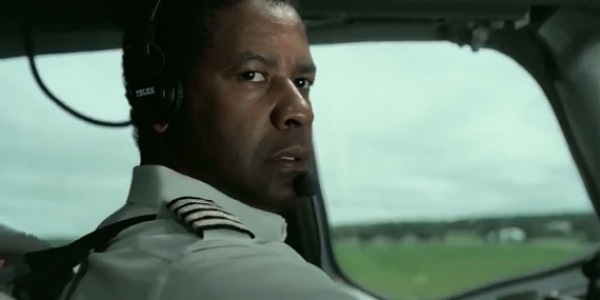 Robert Zemeckis' Flight starring Denzel Washington will screen as the Centerpiece of the Austin Film Festival & Conference. The 2012 event, taking place October 18 - 25 revealed some details of its upcoming event Tuesday including 10 films that will join this year's lineup. AFF annually hosts over 180 film screenings and events, while the Conference welcomes over 100 speakers in its panels and roundtables. Among the films screened during the festival are numerous world and US premieres in a wide range of genres, from comedy to documentary, horror to drama. Also on tap for this year, X-Files creator Chris Carter will receive the event's Outstanding Television Writer Award at AFF's annual Awards Luncheon on Saturday, October 22nd.

Carter will join Paul Feig and Brian Helgeland as part of AFF’s new "Guest Programmer" section of the festival, giving "highly regarded filmmakers" the chance to screen and discuss films they found influential. Carter will also participate in - fittingly - "A Conversation with Chris Carter," where he will share stories from his long career in television and film. Carter will also present special retrospective screenings of The X-Files and Millennium episodes. There are also plans to screen an X-Files marathon at the Alamo Drafthouse.

AFF will release the rest of its lineup in September.

Details of AFF's early 10 films follow with details provided by the festival:

Flight – Centerpiece Film
Writer: John Gatins
Director: Robert Zemeckis
In this action-packed mystery thriller, Academy Award winner Denzel Washington stars as Whip Whitaker, a seasoned airline pilot who miraculously crash-lands his plane after a mid-air catastrophe, saving nearly every soul on board. After the crash, Whip is hailed as a hero, but as more is learned, more questions than answers arise as to who or what was really at fault, and what really happened on that plane? Directed by Robert Zemeckis, the highly anticipated new film also stars John Goodman, Don Cheadle, and Melissa Leo.

Free Samples
Writer: Jim Beggarly
Director: Jay Gammill
A Stanford law school dropout named Jillian escapes to the anonymity of Los Angeles to figure out what she wants to do with her life, and on the day of her college boyfriend’s birthday, she finds herself stuck running an ice cream truck fending off locals and oddball friends alike. This one day spent in a truck on the streets of LA will wake Jillian from her aimless daze and make her see that life doesn’t stop just because you want it to. Starring Jess Weixler, Jesse Eisenberg, Halley Feiffer, Jason Ritter, this great new comedy is directed by Baylor University film school grad Jay Gammill.

It's A Disaster
Writer/Director: Todd Berger
Four couples meet for Sunday brunch only to discover they are stuck in a house together as the world may be about to end. StarringJulia Stiles, America Ferrera and David Cross. Julia Stiles and America Ferrera will present the screening at AFF.

Last Will & Testament
Directors: Laura Wilson, Lisa Wilson
US Premiere
This documentary explores the ongoing debate about the authorship of the works attributed to Shakespeare. Writers and critics, actors and scholars, including Mark Twain, Sigmund Freud, Charlie Chaplin, and many others have struggled to reconcile England’s “Star of Poets” with the grain dealer from Stratford. Why? – Featuring interviews with Vanessa Redgrave, Derek Jacobi, Mark Rylance, and other highly regarded Shakespearean actors.

Pictures of Superheroes
World Premiere
Writer/Director: Don Swaynos
A young maid is asked by her employer to pretend to be his wife as part of a highly questionable business scheme. Meanwhile, she meets the comic book superhero artist living in her employer’s home (seemingly without the employer’s knowledge or permission), and she begins to wonder if there is something more to life than fake marriages and carpet cleaners. Produced by Kelly Williams, and starring Kerri Lendo, John Merriman, Byron Brown and Chris Doubek.

Rising From Ashes
Director: T.C. Johnstone
Two worlds collide when cycling legend Jock Boyer (first American to compete in the Tour de France) moves to Rwanda and teams with Tom Ritchey (inventor of the mountain bike) to help a group of struggling genocide survivors pursue their dream of a national team. As they set out against impossible odds, both Jock and the team find new purpose as they rise from the ashes of their past. Narrated by Forest Whitaker and directed by Austin native T.C. Johnstone, this remarkable story culminated at the 2012 Olympics in London when one of the subjects of the film, Adrien Niyonshuti, competed in the Games and became Rwanda’s first Olympic cyclist.

Shadow Dancer
Writer: Tom Bradby
Director: James March
Single mother Collette McVeigh is a Republican living in Belfast with her mother and hardliner IRA brothers. When she is arrested for her part in an aborted IRA bomb plot in London, an MI5 officer (Mac, played by Clive Owen) offers her a choice: lose everything and go to prison for 25 years or return to Belfast to spy on her own family. With her son’s life in her hands, Collette chooses to place her trust in Mac and return home, but when her brothers’ secret operation is ambushed, suspicions of an informant are raised and Collette finds both herself and her family in grave danger. Starring Clive Owen, Andrea Riseborough, and Gillian Anderson.

Spinning Plates
World Premiere
Writer/Director: Joseph Levy
Spinning Plates is a feature documentary film about three restaurants, extraordinary for what they are today as well as the challenges they have overcome. A cutting-edge restaurant named the seventh best in the world whose chef must battle a life-threatening obstacle to pursue his passion… a 150-year-old family restaurant still standing only because of the unbreakable bond with its community… a fledgling Mexican restaurant whose owners are putting everything they have on the line just to make enough to survive and provide for their young daughter. Features Chef Grant Achatz of Chicago’s Alinea and Chef Thomas Keller of California’s The French Laundry.

To Kill A Memory
World Premiere
Writers: Dustin Rikert, William Shockley, Philip Tiboni
Director: Dustin Rikert
A respected US Marshal is imprisoned after being suspiciously involved in a bank robbery gone wrong. When he learns that the other bank robbers may be going after his wife, the Marshal must escape prison and catch them before it’s too late. This low budget indie Western features an astonishing lead performance from country western singer Kix Brooks of Brooks and Dunn. Kix Brooks will present the screening at AFF.

Paul Feig Presents: The Human Tornado and Bringing Up Baby
This year, AFF is excited to introduce an all new Guest Programmer section, which invites some of our highly regarded panelists and guest filmmakers to program and present films that inspired them. Paul Feig (director of Bridesmaids, creator of “Freaks and Geeks,” also directed episodes of “Arrested Development,” “The Office,” “Mad Men,” “30 Rock” and more) has chosen two very different films: the blaxsploitation Dolemite adventure The Human Tornado and Howard Hawks’ immortal screwball comedy Bringing Up Baby. Don’t miss an opportunity to hear how these two wildly diverse films influenced one of the most in-demand directors in Hollywood today.