The demise of film and the seeming triumph of digital has been a hot topic of discussion for insiders and hardcore enthusiasts for a number of years. But Keanu Reeves is taking the topic into the mainstream(ish) realm with his latest project, Side by Side, which bowed recently in Los Angeles and is set to hit cities around the U.S. in the coming weeks. Co-produced and narrated by Reeves, the 98-minute documentary landed the likes of James Cameron, David Fincher, David Lynch, George Lucas, Danny Boyle, Martin Scorsese, Christopher Nolan and Steven Soderbergh to weigh in on movie-making's (d)evolution. Nolan, he noted, was the most difficult to reach among the people who appear in the doc, which features interviews with 70-plus filmmaking powerhouses. To lure The Dark Knight Rises filmmaker, Reeves went snail mail.

"I actually wrote to him on an old-fashioned typewriter," Reeves told Reuters. "I think he got a kick out of that and we finally shot him in his trailer on the Batman set in LA." Reeves noted that Nolan's schedule was "so crazy" because he was in the midst of filming The Dark Knight Rises, but wanted the filmmaker because of his long-standing opinions about the film vs. digital debate, which caught Reeves' attention in earnest while finishing on a previous project a couple years back.

While working on Henry's Crime, which he also produced a couple of years back, Reeves and the film's production manager, Chris Kenneally, began talking about the rise of digital technology. "We were sitting in the post-production suite trying to match the photochemical image with the digital image, side by side, and it just hit me - film is going away, and we should document this whole evolution," Reeves told Reuter. "So Chris and I gradually put a team together to make the documentary." 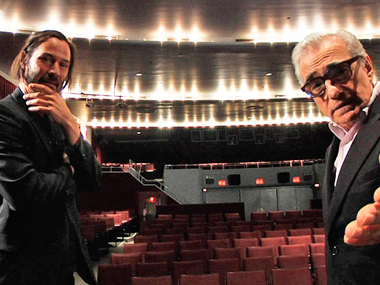 A champion of film himself, none other than Martin Scorsese said earlier this summer he'll probably go digital with his upcoming projects including The Wolf of Wall Street. His previous effort, Hugo was a de facto call for film preservation, something near and dear to the filmmaker's heart. His longtime editor Thelma Schoonmaker told Empire magazine at the time, "I think Marty just feels it's unfortunately over, and there's been no bigger champion of film than him."

And as Side by Side gets set to expand, Reeves appears to agree that film will continue to disintegrate into the annals of movie history. "Even Chris Nolan admits that film, if not dead, is now on life support, and it's just going to become more and more difficult to even get film. Personally I'm a big film fan and it's sad to see it go but the future is digital."

Reeves himself is directing a big screen feature about a a young martial artist set in Beijing titled Man of Tai Chi and he has apparently also accepted - even if begrudgingly - the comparatively cheaper technology.

""We did [go digital]," he said. "I developed this project for five years and we're shooting on location in Beijing and Hong Kong. I'm having a great time directing and I definitely plan to do it again."

Tags: Christopher Nolan, Keanu Reeves, Martin Scorsese, side by side