“I hope you like your films dark and gritty,” Dredd 3D star Karl Urban declared as he introduced the debut screening of the sci-fi reboot Wednesday night before Comic-Con, emphasizing what Lionsgate’s hard-R action pic is not — namely, the second coming of Sylvester Stallone’s campy 1995 take on the comic book enforcer. “I want to apologize to anyone who’s a fan of Lycra and gold codpieces,” he added with a smile. “You’re just going to have to wait for two hours.”

Urban stars as Judge Dredd, a steadfast one-man “judge, jury and executioner” in a futuristic America rendered decrepit by atomic war. Tasked with assessing a rookie Judge (Olivia Thirlby) in the field, Dredd and his green partner find themselves trapped in a tenement building on lockdown, caught in the sights of a crime lord named Ma-Ma (a fantastically brutal Lena Headey) with an army of eager thugs on their trail.

Dredd establishes itself quickly, banishing the memory of the oft-maligned Stallone version by running with a graver tone, ultraviolent action, and its slum-set plot rather than focus on the man beneath the helmet. (Which never comes off, though Urban’s grimace is much more expressive than you’d think.) The cinematography, by Oscar-winner Anthony Dod Mantle (Slumdog Millionaire, 28 Days Later), is often superb, particularly in slowed-down sequences evoking the in-film POV of drug users on “Slo-mo,” an illicit narcotic that slows down time for its user — a clever write-in to justify shooting cool slowed-down sequences, but stunning nonetheless.

Much of Dredd revolves around action — the Judges’ multi-use combat weapons are neat sci-fi gadgets, and Urban and Thirlby creep around with military precision in their SWAT-esque uniforms, bullets sending balletic sprays of red across the screen. It’s a bloody affair with its share of gory kills, but the weight of the loss of life is always palpable; a forlorn sense of humanity hangs in the air, from the moral conflict Thirlby’s Anderson wrestles with in the “executioner” part of her job description to the far-away gaze in Headey’s eyes as she orders her own men murdered, and torturously so, just to send a message. 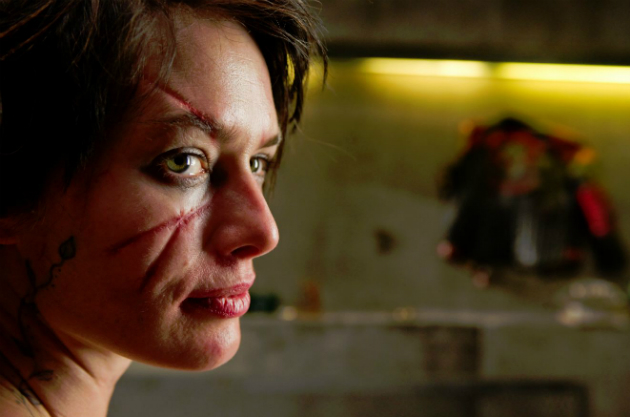 Which brings us to two of Dredd’s biggest strengths: Its female characters. Given that the film’s eponymous hero is a dependably stoic chap whose reputation is so faultless it seems to annoy the other Judges – RoboCop without the Robo, with a set of moral codes as deeply-set as his jawline – Urban does a lot despite acting with just half of his face. But the real depth and complexities lie in Thirlby’s idealistic rookie and Headey’s big boss, two women at opposite ends of the moral spectrum. Anderson finds strength in embracing her own innate sense of empathy over the brutal righteousness of the department, though she proves herself more than capable in physical and mental combat. And Ma-Ma slinks around her penthouse control room, having slashed her way to the top with calculating ruthlessness, wearing the perpetual haunted snarl of a survivor.

As such, it’s disappointing to see how much Dredd simply bottoms out at the end. Writer Alex Garland and director Pete Travis fail to seize the opportunity to tie it all together with meaning — something, anything — to elevate Dredd beyond mere fun, better-than-you-expect shoot 'em up entertainment. The pieces work surprisingly well; so why let the cumulative potential slip through your fingers? Some subtle character developments wrap up the proceedings, which conclude with a coda so abrupt the movie practically, clumsily, begs for a chance to finish its thoughts in a sequel. The first trailer doesn't do Dredd justice — but even then, you can’t help thinking that Dredd, amazingly enough, could have been much more.