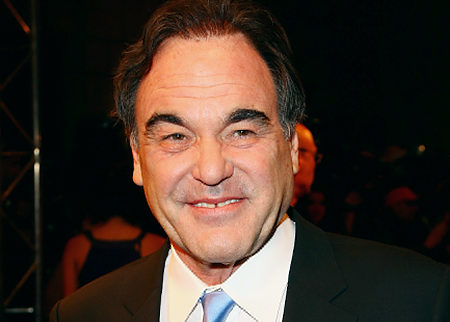 Oliver Stone is certainly not afraid to court controversy. The two-time Oscar winner raised eyebrows with a sympathetic portrayal of Fidel Castro in his 2003 documentary Comandante, a less than sympathetic look at former President George W. Bush in W. and a positive chronicle of Latin America's left-leaning presidents in 2009's South of the Border and he's long been outspoken on issues that win praise from the hard left and venom from the right. On the eve of his latest star-driven bigger budget release, Savages, Stone graced the cover of High Times magazine and over the weekend spoke of his own drug use, how it helped him through Vietnam as a twice-wounded soldier, and about his new movie opening Friday.

In an interview with CBS This Morning Stone spoke sympathetically toward marijuana, which is at the center of his latest feature, and which he used while doing two tours of duty during the Vietnam War. "When I was in Vietnam, [pot] made the difference between being human and being a beast," he said. "There were a lot of guys who were drinking and doing a lot of the killing that was so unnecessary and raping. The guys who did dope were much more conscious of the value of life." Stone said he had served well, was a "good soldier" and added, "I wasn't a slouch."

His latest crime-thriller is based on a novel of the same name by Don Winslow. Starring Taylor Kitsch, Aaron Johnson, Blake Lively, Salma Hayek, Benicio del Toro and John Travolta, the story revolves around two California marijuana growers who share a girlfriend who is kidnapped. The pair (Johnson and Kitsch) are then faced with confronting a Mexican drug cartel lead by Elena Sanchez (Hayek) and Miguel (del Toro) to rescue her.

"I like power [stories], I like people who do the cat and mouse game," Stone said. "You never get what you expect and that's like life." In order to prep for the film, Stone headed south of the border to get a proper feel for some real-life figures in the drug underworld. "Benicio and I hung out with some pretty heavy people on the other side of the border," he said. "Don Winslow knows that world because he's written other books about the subject."

Stone noted that "thank God" the cartels have so far had a limited role in cannabis growing in California since it's still a comparatively small business vs. their much bigger and violent operations, but added: "Like California wine, the stuff being grown there is very high in its potency."