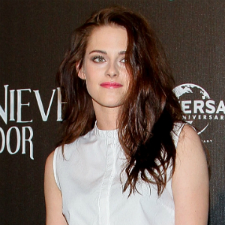 The best tidbit about E.L. James' 50 Shades of Grey S&M erotica series, besides the fact that your mother may be reading the salacious bestselling tomes right this very second, is that the book trilogy began, as great cultural touchstones do, as Twilight fan fiction. So it's all sorts of strange to watch Kristen Stewart and her Snow White and the Huntsman castmates Chris Hemsworth, Sam Claflin, and Charlize Theron reading steamy passages from the naughty, naughty 50 Shades of Grey aloud. Awesome or creepy (or both)? You decide!

Props to MTV's Josh Horowitz for getting the erstwhile Bella Swan to utter the lines hardcore 50 Shades fans have been imagining her saying since James' kinky prose first hit the 'net, but really: Did they have to make them say the 50 Shades killing words?? (Just die already, inner goddess.)

High five to Stewart for being a good sport. Extra points to Theron for giving it all she had. Maybe there's a part for her in the planned film adaptation — Mrs. Robinson, perhaps?