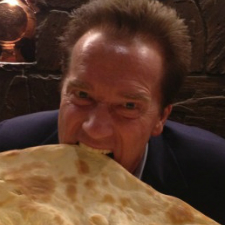 Look, it's Friday. Remember that time I gave you 13 dancing Spider-Men? Yeah. In honor of the weekend (and bodybuilding and social media and Twins and Terminator and Kindergarten Cop, which ruled) let's take a look at the best pins former California governor/Cyberdyne Systems Model 101 Arnold Schwarzenegger has made after a few weeks on Pinterest. Giant naan-eating Governator in 3, 2, 1...

Schwarzenegger, along with more and more Hollywood types (real and fictitious), joined the new photo-pinning app thingy recently in a clever stroke of marketing genius. Looking for help picking the perfect back-cover photo for his upcoming memoir, Total Recall: My Unbelievably True Life Story, Schwarzenegger put out a call to fans; Tweet or Pinterest or Facebook Arnie a photo of -- who else? -- Arnie from any moment in his bizarrely varied professional career and if he uses your selection, he'll give you a shout-out!

But while crowd-sourcing for his own book seems to have been the original impetus for Schwarzenegger's foray into the brave new world of Pinterest, it's yielded a cache of kinda-great vintage photos of Arnold in action over the years. (Warning: If oiled-up beefcake shots of Arnold in his meathead prime freak you out, avoid his "Bodybuilder" board.)

Even better: The more personal, candid photos he posts to the "Recent Trips" section, which is where he pins pics of himself eating giant slabs of naan and calling green energy "sexy."

Herewith, my friends, let us quickly rank the 5 best photos on Arnold's Pinterest:

5. Arnold eats his way across India!

4. Actual caption: "Geneva: I had a great time in Switzerland speaking about making green energy sexy."

3. Let us not forget that this man was once in charge of the world's eighth largest economy.

2. Arnold poses while buying charitable items at Wal-Mart for cold people, thus proving that he is one of you people.