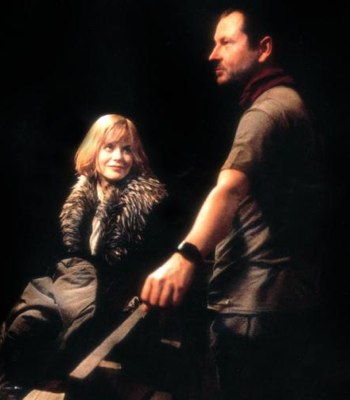 Why it's an Inessential Essential: It's admittedly a little strange to think of this fairly well-known film as needing endorsement of any kind. However, Lionsgate recently released a new Nicole Kidman box set, packaging the first film in Lars von Trier's acerbic but still incomplete "America Trilogy" in the same collection as more high-profile and easy-to-swallow Kidman roles like Cold Mountain, Rabbit Hole and The Others. The juxtaposition is striking, and as the clear odd film out in the four-disc set, Dogville emerges as perhaps Kidman's most inessential essential.

As von Trier guardedly remarks on the film's audio commentary, the making of Dogville hinged on Kidman's involvement. The film's only began shooting when Kidman was able to fit the gig into her busy work schedule, frustrating Von Trier, who says that he understood and there was no real way around it. He had to have Kidman play Grace, the fugitive gangster's daughter who finds refuge in the titular small town.

Kidman's performance essentially fuels von Trier's rabid vision of America as a pseudo-Smalltown, USA. Dogville's self-interested residents orbit her character as if she were the Sun and the consequences of her actions almost always eclipses everyone else's. She is good-natured and that's why von Trier stir the conniving Dogvilleians' shit. It's why von Trier's camera (he's credited as a camera operator in the end credits) always seems to cling to Kidman's face. He loves that face ("She's a very good listener," he remarks to director of photography Anthony Dod Mantle during the audio commentary). Which in turn is why, according to the skittish but always provocative Danish filmmaker says that Kidman was put off by how physically close he would get to her during shooting. Kidman gives an indelibly nuanced performance here, making the film a barbed satire first and a showcase for Kidman a close second.

How the DVD Makes the Case For the Film: Lionsgate repackaged their old DVD release of Dogville but that's all right given how inadvertently revealing von Trier and Mantle's audio commentary is. The two filmmakers go silent for a number of scenes as von Trier clearly doesn't know what to say. This conversation seems to have been recorded in one take and sometime between the film screened at the Cannes Film Festival and its original 2004 American theatrical release. When it comes to Kidman, von Trier seems deliberately shy. But he does bring up certain things that hint at why Kidman didn't reprise her role as Grace in Manderlay, like how Kidman didn't like the idea of Grace dragging around a heavy weight around her attached to a collar with a bell. Von Trier says he doesn't really mind as that was "the job, not to like it." But while LvT generally sounds like he just wants to put Dogville behind him, his silence regarding Kidman seems like it was his way of trying to be diplomatic. He complements Kidman's performance but also readily admits that working with such a big star frustrated him, too. When talking about working around Kidman's schedule, he remarks, "She has to do what she has
to do but." Then he exhales dramatically and continues: "It kind of suffocates you in your creative process.”

Other Interesting Trivia: Von Trier says a number of funny (ie: funny-peculiar, not funny ha ha) off-the-cuff things that reveal just how uncomfortable he is talking about Kidman and the film after-the-fact, like when he jokes about how much Stellan Skarsgaard, "loves to be naked, like me," during Grace's rape scene. In fact, the only remark he makes about Kidman or Grace during this scene is that her head is over the chalk line demarcating the borders of the house she's being raped in. He also half-snorts, half-laughs at the absurdity of Kidman complaining about "[feeling] trapped" by having to wear Grace's degrading collar. Von Trier's point couldn't be more clear: Dogville wouldn't be Dogville if it were less venomous. But it also wouldn't be Dogville without Kidman, too, and that's something he sounds reluctant to admit.