Oh...my...GOD, Becky -- look at Catwoman's butt. Ahem. In a new promo image from The Dark Knight Rises, Anne Hathaway poses as Catwoman and shows, as many salivating fanboys have already suggested, just why the Batman sequel might've earned that PG-13 for "sensuality." But wait! Why is everyone talking about Catwoman's butt and not Batman's meticulously sculpted-but-jaunty rubberized codpiece? Equal opportunity for costumed cosplay ogling after the jump, thanks to two new promo images for the July tentpole.

A mask and cat-ear goggles? Leather gloves over a bodysuit also made of leather, with thigh-high boots to boot? This is one layered lady. I bet she makes that squeaking leather sound when she walks.

Now, maybe Catwoman's using her butt as yet another deadly weapon. Or maybe when you wear giant stiletto shit-kicking heels like that, one's rear lifts naturally (welcome to the world of woman secrets, fellas). Ok, fine. Take a good gander. Now, can we move on to...Batman's bat-junk?

Behold, from the current issue of EW: 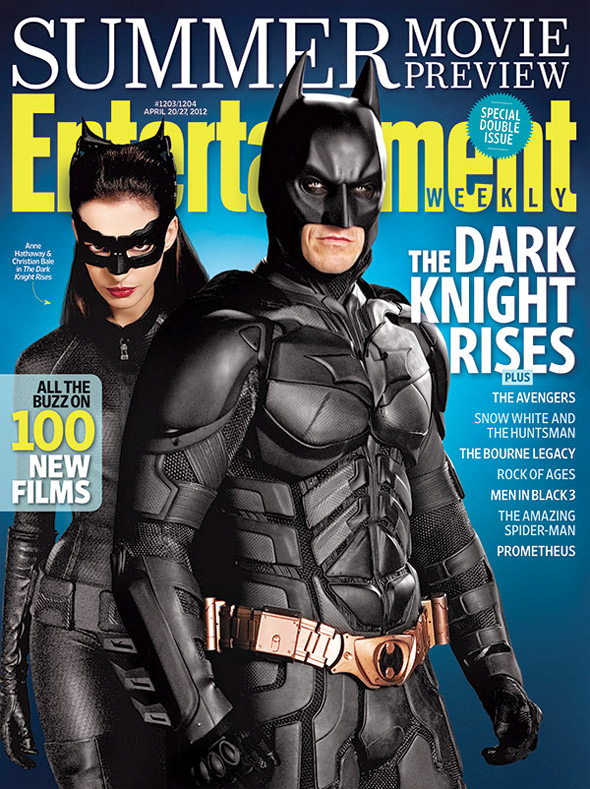 I don't know about you, but this kind of overly structured superhero outfit feels excessive and a little exhausting to look at. I can't picture anyone toiling away somewhere in the Bat-sweatshop making every little molded rubber part of Batman's faux six-pack, though it is funny to imagine the rationale for such a design: He needs protection... for each pack! Do you think Bruce Wayne toiled very long over the agonizing decision to go with the muted bronze of his utility belt? How does one fit oneself for the perfectly proportioned superhero codpiece?

The above image comes from EW's Summer Movie Preview issue, which was accompanied by various Chris Nolan non-spoiler quotes and this very interesting tidbit concerning baddie Bane, played by Tom Hardy, and his unusual voice:

“It’s a risk, because we could be laughed at — or it could be very fresh and exciting,” says Hardy, adding that the voice he developed was influenced by many factors, including a desire to honor the comic book character’s brains and Caribbean heritage. “The audience mustn’t be too concerned about the mumbly voice,” says Hardy. “As the film progresses, I think you’ll be able to tune to its setting.”

Aha! And so we kind of get an answer in the great Bane ethnicity debate: Hardy is seemingly playing the villain true to his Caribbean/Latin heritage as written in the comics, which hardly closes the book on the issue. The fact that Bane's being played by a white guy could conceivably still be explained away in the film; the character's comic book origins cite a British mercenary father and a local rebel mother, which seems to make Bane half-Latino, half-Caucasian. But time will tell. For now, we have butts and junk to stare at.