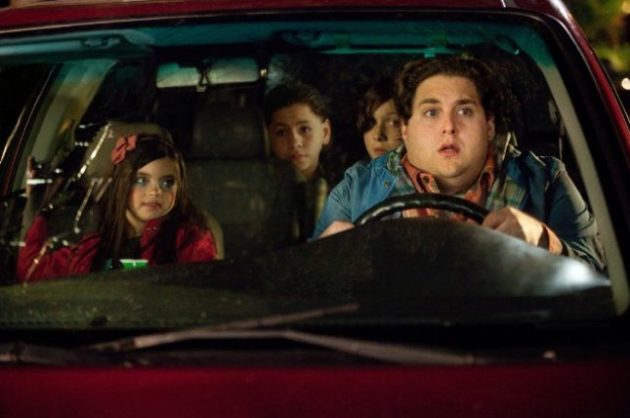 What's the Film: The Sitter (2011), new on DVD and Blu-ray via 20th Century Fox Home Entertainment

Why it's an Inessential Essential: Director David Gordon Green’s transition from being an American indie darling to a reviled slacker-comedy pumper-outter is kind of astonishing. One minute, he’s being praised for being the Terrence Malick-inspired director of such films as George Washington and All The Real Girls; the next he’s being put down for making lazy pot comedies like Your Highness and The Sitter. But the thing of it is: Green’s comedies don’t deserve to be compared to good movies.

The Sitter in particular is a goofy, strange and very sloppy comedy that also happens to feature frequently inspired comedic performances from Jonah Hill and Sam Rockwell. It’s also a rare slacker comedy where a slovenly ditz who only succeeds in spite of himself never lets us forget that he’s an “asshole” (“Come on, Ricky Martin, let’s get out of here”), a “pussy” (“No, I’m a whole different pussy now”), and a total spaz (“Let that debris fall across your face, girl.”). Consistency is no longer (and I’d argue never was) Green’s strong suit. But in the realm of the slacker comedy, The Sitter is actually all right.

Hill stars as Noah Griffith, a nerd too self-absorbed to see that his girlfriend Marisa (Ari Graynor) is stringing him along. To help his divorcee of a mother go out on a date, Noah reluctantly elects to baby-sit three of the most grating problem children ever committed to screen: Rodrigo (Kevin Hernandez), a cherry bomb-dropping psychopath; Slater (Max Records), a histrionically repressed blueblood; and Blithe (Landry Bender), a “celebutante”-obsessed prima donna. But on top of that, Noah also has to buy cocaine from Karl (Rockwell), a body-builder-obsessed drug dealer, and avoid being arrested.

How the DVD/Blu Makes the Case for the Film: The “Totally Irresponsible” edition of the film confirms a lot of my suspicions about why The Sitter’s 81-minute theatrical cut is so all over the place. More importantly, the deleted scenes and outtakes are a good reminder that The Sitter wouldn’t even be bearable were it not for Hill's — and, to a lesser extent, Rockwell’s — performance. Some of the unused improv scenes are gut-bustingly random, like when Hill bitches out an effete-looking valet who loses Noah’s minivan (long story) by whining, “You didn’t lose your Vin Diesel poster,” and “You didn’t lose your Stray Cats box set!” As bad as Green’s instincts may have been when it came to The Sitter’s kiddy-centric humor, you really can’t say that he didn’t get a good turn out of Hill — when he gave him enough space to work, that is.

Other Interesting Trivia: In the “Sits-and-Giggles” outtakes reel, there’s shots of an unused green-screened sequence where Rockwell and Hill fight on a carousel. At one point, Hill jokes about needing a safe word, though it’s unclear whether he’s in character or not. I bet that scene was funny.

PREVIOUSLY: Inessential Essentials: The Last Temptation of Christ on Blu-ray