This fall you'll see Joseph Gordon-Levitt as you've never seen him before: As Bruce Willis. In the sci-fi time-travel action pic Looper, from Brick director Rian Johnson, Gordon-Levitt plays Joe, an assassin who ties up loose ends for the mob by killing targets as they're sent back in time from the future -- until one day his own future self (played by Willis) comes through for extermination. Previewing a teaser for the September release at WonderCon, Johnson and Gordon-Levitt discussed the trickiness of transforming Gordon-Levitt into a young Willis, pulled off with the aid of prosthetics, and why it's particularly difficult to talk about their time travel thriller.

With Willis playing the older version of Gordon-Levitt, the younger actor had to transform in two ways to better resemble his onscreen future self. The first trick: Three hours of prosthetics each day, which lent Gordon-Levitt more of a physical likeness.

"We basically had to figure out a way to sell Joe as a young Bruce Willis," Johnson explained, giving much of the credit Gordon-Levitt's performance, which he described as "this incredible high wire act of acting, where Joe is doing Bruce but at the same time he’s creating a unique character who has the Bruce voice." 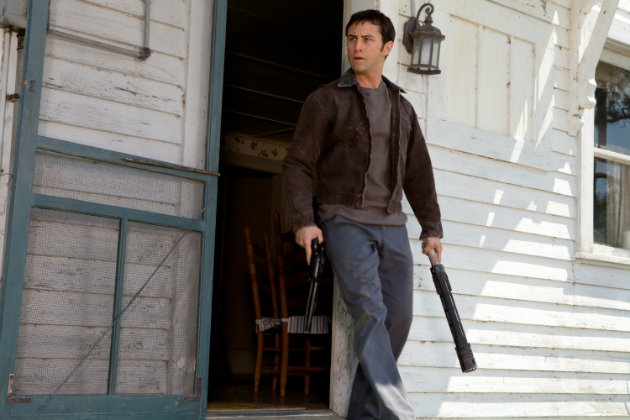 "It’s kind of amazing to watch. It’s his own character that he created but at the same time you see that character and you believe in the movie that could be a younger version of the Bruce you’re seeing onscreen."

Gordon-Levitt adopted Willis's mannerisms by studying how he delivered lines in previous films, and by observing the old-fashioned way: In the flesh. "I watched all of his movies and took the audio out of his movies and put them on my iPod so I could listen to them over and over again," he said, "but by far the most productive part of the preparation process was just hanging out, shooting the shit, having dinner, taking about music -- getting to know him."

The world of Looper is more grounded in a gritty reality than in a fantasy atmosphere, with the time-travel element serving as a tool rather than the film's focus -- a choice Johnson says was somewhat borne of necessity due to the inherent difficulties of tackling a time-travel story to begin with. "Any time time travel is part of a story it’s kind of this beast," Johnson said. "From a writing standpoint it’s a problem because time travel never makes sense. Unless you’re Shane Carruth, who I think actually knows how time travel works, the best you can do is this magic trick where you distract the audience narratively from the fact that it actually doesn’t make sense." 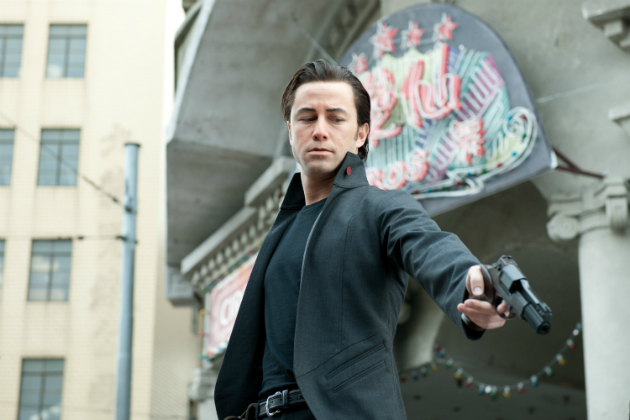 Johnson turned to James Cameron's Terminator as a model on how to use the time-travel element. "For me that was a really fun challenge: How do you have time travel be an element in the movie but convince the audience not to think about it so deeply that they’re ignoring the movie thinking, 'But wait, this' – or 'But wait, that?' The approach we took is that these guys are assassins who use time travel as part of their job. We’re just going to be with them, and they don’t know how this stuff works – they don’t know the science, they don’t care about grandfather paradoxes and all the complexities of message board comments on the i09 site about how it works and how it doesn't. They're showing up every day, a guy is appearing from the future and they’re shooting him – that’s their job."

Nathan Johnson, cousin to the director and composer on both Brick and The Brothers Bloom, came up with an inventive concept for the score to match. "He took this tape recorder out to New Orleans where we were shooting the movie and found all these sounds, sampled them, slowed them down 3000 percent," explained Rian Johnson, "and basically using all these unconventional sounds built up a score that has the size of an orchestra. It’s this huge action movie score but the sounds that you’re hearing are just foreign to your ear."

All that said, Johnson and Gordon-Levitt found themselves choosing their words wisely talking up Looper. Johnson explained: "A big part of what’s fun about the movie is figuring out what it is, and figuring out what it’s going to be by the end of it."

Looper hits theaters on September 28. Get more from WonderCon 2012 here.