Friday in Washington D.C., Secret Service agents arrested protesters gathered at the Sudanese Embassy to draw attention to the ongoing humanitarian and food crisis in the North African nation. Among those charged: Members of Congress, Martin Luther King III, the president of the NAACP, journalist Nick Clooney, and his son, George Clooney, whose star power lent the protest an elevated media platform. Ol' George has long been vocal in his political activism, using his celebrity to help shed light on humanitarian concerns, and as evidenced by these 9 most handsomely stoic of Clooney shots from today, he makes social activism look darn good.

I'm partly jesting, of course. The suffering of the Sudanese people is far more significant an issue than pictures of a movie star stumping for on his day off. But to many, Clooney's paparazzi-captured arrest is the first they'll hear of the conditions in Sudan -- or the culpability, as the protesters decried, of the Sudanese government in its own people's suffering. Here's a case in which celebrity power can be used to raise awareness on real issues and not, say, Kim Kardashian's divorce. And it's shots like these that sometimes get the world's attention.

So shall we take a cue from Clooney? Click for images. 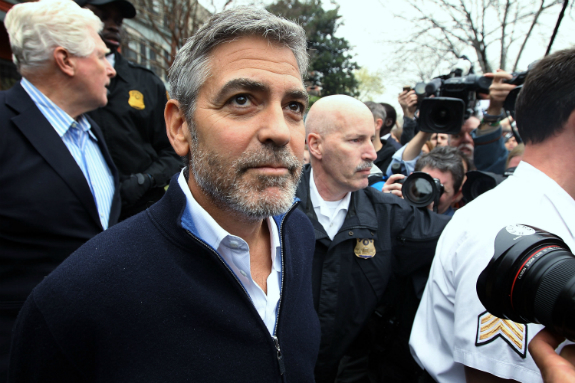 Before his arrest, Clooney spoke to journalists gathered outside the Sudanese Embassy. CNN -- who identifies Nick Clooney as "Father of George Clooney" in their video coverage, incidentally -- reports:

"We are here really to ask two very simple questions," Clooney said moments before his arrest. "The first question is something immediate -- and immediately, we need humanitarian aid to be allowed into the Sudan before it becomes the worst humanitarian crisis in the world."

The second thing, he said, "is for the government in Khartoum to stop randomly killing its own innocent men, women and children. Stop raping them and stop starving them. That's all we ask."