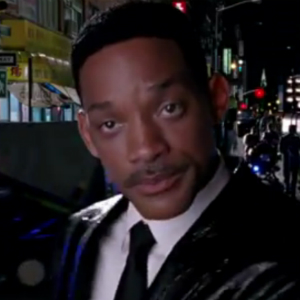 Sony's got quite the job ahead of them selling the mega-budgeted sequel Men in Black III, due in May, if the new trailer is any indication: See Will Smith drop lines like "I don't have no problem pimp-slapping the shiznit outta Andy Warhol" and be transported to a futuristic time-traveling retro '60s that looks and sounds a lot like the one Austin Powers came from. I guess the '90s are the new '80s, but this is just lazy.

The new sequel follows alien-hunting Agent J (Smith) into the past to save Agent K (Tommy Lee Jones) by teaming up with a younger version of K (Josh Brolin doing his best Tommy Lee Jones impression). Look forward to the usual broad aliens-among-us gags and that mind eraser schtick that audiences loved in 1997! Smith bemoans that he's "getting too old for this," and I'm inclined to agree. Aren't we all?