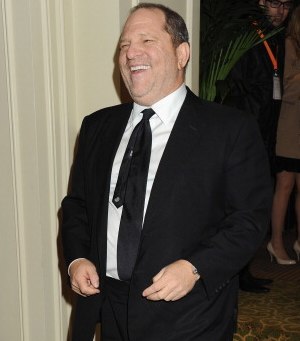 What week for Harvey Weinstein: Win a truckload of Oscars on Sunday, re-up on a PR war with the MPAA on Tuesday, and then today — as his company's other notable French import Intouchables prepares for its U.S. premiere in New York City — start a trans-Atlantic flame war with France's most infamously racist old coot. It's like Linsanity, but for Hollywood megalomaniacs! Weinsanity! And there's more.

First though, here's the notorious, ultra-conservative French asshole Jean-Marie Le Pen weighing in on Intouchables, the blockbuster buddy flick about (per a Weinstein Co. statement) "a wealthy, physically disabled risk taker, the picture of established French nobility, who lost his wife in an accident and whose world is turned upside down when he hires a young, good-humored, black Muslim ex-con as his caretaker." I don't know how one exclaims, "Say whaaaa?" in French, but it probably sounds something like this:

“France is like this handicapped person stuck in this wheelchair, and we are going to have to wait for the help of these suburb youngsters and the immigration in general. I don't subscribe to this point of view. It's a movie, a novel. And we have to take it that way and not like an example for the future. It would be a disaster if France would find itself in the same situation as this poor handicapped person.”

On the one hand, this is just Le Pen being Le Pen. Big deal. On the other, check out Harvey being Harvey — i.e. waiting a full month after the interview aired (he acquired Intouchables' distribution and English-language remake rights last summer) to lay into the easiest, fattest target imaginable on his film's behalf:

"It's not a surprise to hear such an intolerant statement from the man who founded and was president of the extreme-right, xenophobic, racist National Front party. Le Pen made a repulsive statement, representing a bigoted world view. And right now, Jean-Marie's daughter, Marine Le Pen, is running for president of France as the leader of the National Front party -- and she is fourth in the polls with almost 16% of the population intending to vote for her. That's frightening to me, and I think it's important to speak up and speak out against Le Pen and his ideas. That's why I'm proud to bring THE INTOUCHABLES to American audiences. This movie is based on a true story, and it's a funny, extremely entertaining illustration of how simple human connection trounces socioeconomic, religious and racial divides."

Perfect. Did I mention Intouchables premieres this evening as the Opening Night film of Lincoln Center's prestigious Rendez-Vous with French Cinema series and opens May 25 in limited release? Ahem.

Meanwhile, all of Harvey's recent protesting-too-much has received one of its most devastating rebuttals to date from Mark Lipsky, the former indie exec turned filmmaker who got his start in the Weinsteins' Miramax regime. That experience yielded today's extraordinary takedown at indieWIRE, where Lipsky further exposed Harvey's hypocritical, gratuitously self-serving and exploitative handling of his documentary Bully:

I hate bullying and always have. I also have an abiding contempt for hypocrisy. If Harvey has, in fact, reformed, he needs to come out and say so publicly. He needs to own his past behavior, admit to his addiction – bullying is an addiction, after all, both to power and dominance – and pledge to never bully anyone again. If he’s looking for ink and controversy (and he certainly is) there’s no more honest or powerful way for him and the film to get it. [...]

Harvey, you have a rare opportunity with Bully to actually move the needle and leave the world a better place. I believe that you’d like to see bullying stop. I believe that you “want every child, parent, and educator in America to see “Bully,” and not just for the boxoffice. So get up on that incredibly high horse of yours and use that bully pulpit to assure children, parents and educators everywhere that if you can reform, anyone can.

Light a fire, Harvey, for every kid that’s ever bullied someone and for every parent who taught them how.