How the Hell Did Paradise Lost 3 Lose the Best Documentary Oscar? 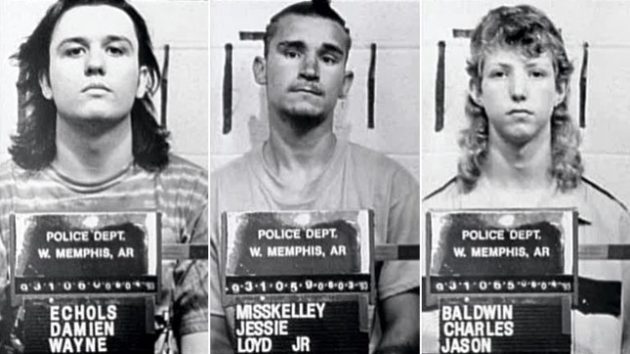 Congratulations to Dan Lindsay and TJ Martin, whose film Undefeated lived up to its title at last night's Academy Awards by taking home the Best Documentary Feature Oscar. Exploring the intersection of class, race and a hard-luck high-school football team, the doc started earning fans a year ago at South by Southwest — including Harvey Weinstein, who acquired Undefeated on the spot and promptly fast-tracked it for 2012 awards glory. Mission accomplished. The only thing Undefeated didn't do? How about help get three unjustly convicted men — one condemned to die — out of prison?

Which brings us to Paradise Lost 3: Purgatory, the final installment of Joe Berlinger and Bruce Sinofsky's nearly 20-year investigation into the grisly murders of three boys in West Memphis, Ark., and the subsequent trials and convictions of three teenagers in the case. Since the first film debuted in 1996 (Paradise Lost 2: Revelations appeared in 2000), the series's illumination of police and judicial misconduct — to say nothing of misplaced allegations of Satanism and other perceived motives — became instrumental in the crusade to free Damien Echols, Jessie Misskelley and Jason Baldwin. The "West Memphis 3" quickly developed into a cause célèbre among observers from the cultural to legal realms; Metallica contributed music to the films, further boosting their profiles, while defense lawyers and DNA experts raced to find evidence persuasive enough to save Echols from the death chamber and, hopefully, release all three men from behind bars.

Of course, as a regular consumer of media, you likely already know these details. Unless, that is, you're a member of the Academy's clinically insane Documentary Branch. In which case you should be ashamed of yourself.

Not to take anything away from Undefeated, but... Well, actually, yeah. I would like to take something away from Undefeated: Its Best Documentary Oscar. Not necessarily because of any technical inferiority — it's a fine, inspiring, well-made film — but merely on the qualitative basis of not having saved a man's life or helped liberate the West Memphis 3 through thousands upon thousands of hours of research, interviews, editing and, ultimately, pure storytelling.

On the one hand, sure: As Berlinger told Movieline a few weeks ago in our Documentary Nominee roundtable, "[T]here can be no bigger prize than having helped get three innocent men get released from prison after 18 plus years of wrongful imprisonment." On the other hand, fuck that. Let's just be honest: If we're going to reward films like last night's Documentary Short winner Saving Face or recent Doc Feature triumphs like An Inconvenient Truth, The Cove and Inside Job for their honorable activist intent, then what more does Paradise Lost 3 have to do to win over Academy voters? If Berlinger and Sinofsky had freed three dolphins from certain death in Japan, would that have tilted the Oscar scales in their favor? Or maybe filmed a boring-ass slideshow detailing their findings in the case? Al Gore couldn't even stop global warming. These guys exposed one of America's most protracted miscarriages of justice (made all the worse by the fact that prosecutors refuse to reopen the case, thus leaving the murder mystery unsolved) not once, not twice, but three times, establishing the narrative foundation on which the whole campaign to free the West Memphis 3 was built.

So what gives? Was this the last indignity to be committed by the Documentary Branch under its previous set of rules — a garish sloughing off of a film funded and broadcast by HBO as opposed to one following the classic theatrical pattern that Academy leadership so cherishes? What a truly fine barometer of quality, except that Undefeated had the same one-week qualifying run that PL3 had, only opening in theaters a week-and-a-half ago. Weinstein and HBO took advantage of the same loophole. Could it have just been the Weinstein factor alone — Harvey being Harvey, pushing his nonfiction wares in his Artist/Iron Lady downtime?

Or, as a friend suggested to me this morning in the clearing Oscar smoke, is this just the Doc Branch holding out for the Peter Jackson-produced West of Memphis, a recent Sundance premiere due in theaters at some point in 2012? Jackson is the only figure in this schema with as much (if not more) Academy clout as Weinstein, and it's entirely conceivable that whatever momentum gathered in Undefeated's favor — or, perhaps more accurately, in any direction away from PL3 — began with a quiet, sturdy nudge from New Zealand. It's impossible to say or ever know for sure — unless Weinstein acquires the currently distributor-less West of Memphis, I suppose, in which case even one of those dolphins from The Cove could do the math and know the fix is in.

In any case, the whole thing amounts to another black eye for the Academy's Doc branch, a body ostensibly charged with the responsibility of recognizing each year's best achievement in documentary filmmaking but which has so lost the plot regarding the form's boldest, most influential works that it has sunk irretrievably beneath contempt. Like, I get why Banksy's intoxicating, masterful Exit Through the Gift Shop last year couldn't surmount the dry, staid recession expose Inside Job; the branch has always sought to persuade everybody to believe that it is preoccupied with Issues, even as it routinely, criminally snubs the likes of Steve James (Hoop Dreams, The Interrupters) from even being nominated. But that inconsistency aside, here was a chance for the Academy to recognize filmmaking that made as much of a social impact as any Best Documentary Feature winner since perhaps Common Threads: Stories From the Quilt (another documentary originated by HBO, incidentally) claimed the prize 22 years ago.

Moreover, it was a crucial opportunity for the Academy to help further mobilize the case for fully exonerating the West Memphis 3, whose release was conditional on an Alford plea that upheld their guilty verdict while leaving them on the equivalent of 10 years' probation. The governor of Arkansas won't pardon them without an alternative conviction, which prosecutors refuse to seek pretty much out of spite. So the saga continues, but whatever. As long as Harvey's happy, right?

I can't overstate how frustrated this makes me. If nothing else, the Paradise Lost films taught us how to know a spot a sham when we see one — to stick to the facts and to your values and keep your eyes on the prize. But with the Oscars at this point, who even wants this particular prize? When one of the only Academy Awards categories with any legitimate sociocultural import is turned into the same old irrelevant boy's club where we find shit like Real Steel nominated, what values are we adhering to? For Christ's sake, people: The Transformers trilogy has more Oscars than the Paradise Lost trilogy. CORRECTION: The Transformers films have not in fact won an Oscar. I'm kind of happy to be wrong about this, but still, I regret the error.

This is not acceptable. Something must change. I'd hate to think that it begins with me giving up, but that's probably where it's headed. In any case, I'm open to suggestions.