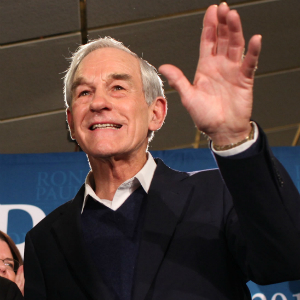 Candidates campaigning for the Presidential ticket usually opt for safe campaign songs carefully chosen to align themselves consciously and subconsciously with certain sets of values, but last night, Ron Paul went a different route: He and his supporters celebrated their second-place victory in the New Hampshire Republican primary to the sounds of "The Imperial March" from Star Wars. Yes, Darth Vader's theme song.

Most folks know the Imperial March is not your traditional signifier of wholesome, upstanding goodness. I mean, it's Darth Vader's personal theme, the ditty that warns of impending throat crushings and legions of Stormtroopers at the ready to exact all manner of evil for the dark side. But Paul, as the Telegraph noted, knows his demographic. And he gave a rally cry of a speech following his New Hampshire success that explained the song choice, kinda.

"I sort of have to chuckle when they describe you and me as being 'dangerous,' Paul said to a crowd that reportedly cheered the loudest when the ominous Vader tune played over the loudspeakers. "That’s one thing they are telling the truth, because we are dangerous -- to the status quo!"

Over at NPR's Morning Edition geek props are in order to Robert Smith for his amusing report on the random confluence of Star Wars and Ron Paul, which suggests that Paul is channeling more Skywalker than Vader: "Getting the nomination for Ron Paul is like hitting a 2-meter target from an X-wing fighter." Which makes New Hampshire voters, perhaps, the womp rats?

In any case, just another curious instance of pop culture co-opting after all that superhero chatter and Paul's Bond villain-esque nickname, "Dr. No." (He does kind of resemble an impish Joseph Wiseman...)