'That Jackass': Armond White Charms Again at the NYFCC Awards 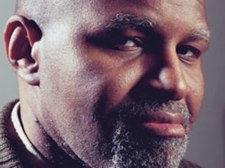 Looker proprietor and all-around swell guy Lawrence Levi braved last night's New York Film Critic's Circle Awards so you (read: I) didn't have to, submitting to Twitter one of the juicier exchanges overheard on a night when anecdotal blips rained down like thumbs at an Adam Sandler flick.

Perhaps obviously -- despite the attendance of such luminaries as Brad Pitt, Robert De Niro and others -- we turn the spotlight to contrarian messiah Armond White, in conversation with Best Supporting Actor award-winner Albert Brooks about a certain recently laid-off Village Voice institution:

Yowza! I mean, at least this year White downgraded from "That racist," but... Anyway. This guy!