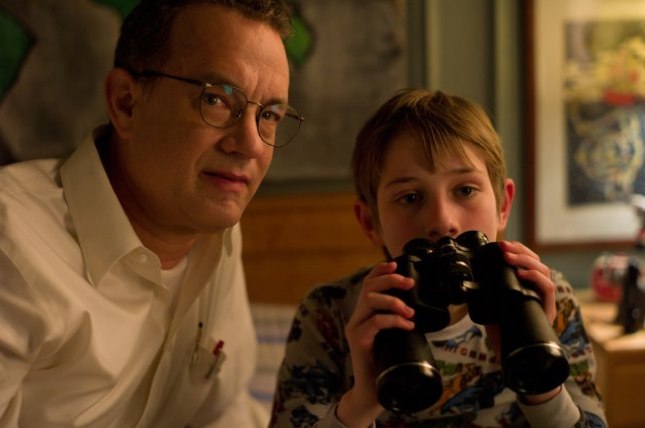 In 2005, when Jonathan Safran Foer's novel Extremely Loud and Incredibly Close was published, Walter Kirn, writing in the New York Times Book Review, summed up the book's "grand ambition" this way: "To take on the most explosive subject available while showing no passion, giving no offense, adopting no point of view and venturing no sentiment more hazardous than that history is sad and brutal and wouldn't it be nicer if it weren't." Kirn couldn't, at that point, have seen Stephen Daldry's film adaptation of the book. But with that sentence, he pretty much wrote the review in advance.

Extremely Loud and Incredibly Close tells the story of Oskar Schell (Thomas Horn), a perpetually wan 9-year-old New Yorker struggling with his father's death in the events of 9/11. Dad Thomas (Tom Hanks, playing a particularly insufferable kind of ultra-reasonable dadness) was a jeweler by trade, but only because he wanted to make a decent life for himself, his wife Linda (an efficient but bloodless Sandra Bullock) and young Oskar. In reality, he was a science-nerd know-it-all type who would send Oskar out on field expeditions to discover new things about the city, and, it turns out, to get him comfortable talking to people. Oskar is a bit awkward in that department -- at one point he precociously announces that he was once tested for "Asperger's Disease," but that "the results were inconclusive." But of course.

Oskar is obviously traumatized by his father's death, not least because in the last minutes of his life dad left several increasingly doomy messages on the family's home answering machine, messages Oskar heard when he was sent home early from school on that fateful day. But he never tells his mother about them; instead, he turns inside himself, trying to hang onto scraps of memories of his father. Until, one day, rooting around in his parents' closet he finds (and breaks) a vase. Inside is a small envelope, marked with the name "Black" and containing a key. Oskar takes it upon himself to locate every person named Black in the five boroughs, paying each a personal visit (on foot -- the subway, along with most other things in the city, makes him anxious). He catalogs these names and visits meticulously, pasting mementos of his search in a scrapbook. He also scratches at his skin, lashes out at his mother, and indulges in a never-ending stream of obnoxious-whiz-kid quips and insights, including a breathless interior monologue about the multitudinous things in New York (people eating, sneakers wrapped around phone lines, and so forth) that give him the heebie-jeebies.

Poor little Oskar! Such an adorable, pint-sized heap of neuroses. What better mouthpiece for an author, or a filmmaker, to use as a way of exploring the personal cost of a great communal tragedy. Do you get the idea that Oskar must emerge from his own teeny-tiny personal prison and, yes, embrace the world? Never has the tragedy of 9/11 been made so shrinky-dinked.

Daldry has made a career out of taking acclaimed works of literary fiction (The Hours, The Reader) and transforming them into snoozy, self-congratulatory, assertively tasteful movies, the equivalent of book clubs that pride themselves on choosing only "quality" books. But he's outdone himself with Incredibly Close; there's something cloistered and cushy about it, as if it were a movie made by Upper East Siders for Upper East Siders (the Park Avenue sort, not the 86th-and-Lex sort). Oskar isn't supposed to be rich; though it's not clear what his mother does, his father is a rather modest sort of jeweler. But the family does live in a building with a doorman (played by a gruff, grumpy John Goodman) and a big, clean, well-lit marble lobby -- I don't need to tell you what that kind of real estate generally costs in New York. And when Oskar is let out of school early on that horrific day, he seems to be far enough uptown that that mythical downtown, where all the terrible stuff was happening, really does seem miles away.

You may also be interested to note that many of the Blacks Oskar encounters in his investigation are, yes, actually black. (Those would include Viola Davis and Jeffrey Wright, playing two people who may or may not hold the answer Oskar is looking for. Their performances are as believable as possible, considering their characters, as written, are practically made of cardboard.) That means Oskar gets experience talking to actual black people, some of them from the lower classes. How wonderful! You can't buy that sort of education at the Browning School.

Mostly, Extremely Loud and Incredibly Close isn't even offensive. It's too dull and spineless to get much of a rise out of you. Shot by Chris Menges, it does give us a lush, rich, patchwork-style view of New York. But even then, there's something too novel about the workaday food-cart vendors and pedestrians who people the movie's universe -- it's all a bit too sparkling, too easy. Alexandre Desplat gives us one of his scribbled-on-a-napkin scores, as opposed to one of his great ones: It's timid and nice and tiptoeing, a lot like the movie itself. In fact, even though the subject matter is very different, the picture Extremely Loud and Incredibly Close most closely resembles is Peter Jackson's botched version of Alice Sebold's The Lovely Bones. Like that movie, it offers a view of childhood that comes from an adult who's constantly looking over his shoulder, rather than from a real -- even a fictitiously real -- child.

The only bright spot in Extremely Loud and Incredibly Close is Max von Sydow, as a mysterious, and mysteriously mute, older gent who, as Oskar tells us in one of his incessant voiceovers, lived in Dresden during the war and "went through some really bad stuff." Like, maybe even 9/11 bad. If you're the kind of moviegoer who ducks when you see an extremely loud metaphor headed your way, you don't need me to tell you that that one is coming incredibly close.