Tarsem on Going Mainstream with Immortals and the Race to Finish Mirror, Mirror Before Snow White 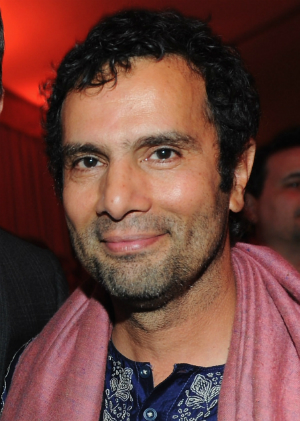 Some directors clearly have no filter and suffer for it; others choose to live altogether filter-less, playing the game their own way, on their own terms. Which is why earlier this year Movieline anointed Tarsem Singh (The Cell, The Fall) the honey badger of Hollywood; an indie film talent recently gone mainstream -- who wore a homemade shirt proclaiming "I've been media trained" at WonderCon -- Tarsem's infamously cheeky public persona might threaten to overtake his work if only his films, just three features to date counting this week's Immortals, weren't so distinctive and gorgeous.

Tarsem may have originally envisioned Immortals as an anachronistic take on Greek mythology akin to Baz Luhrmann's Romeo + Juliet, but playing in the mainstream studio sandbox meant making some concessions. Still, the resulting period fantasy actioner is a visual marvel, starring Henry Cavill as a human Theseus battling the evil king Hyperion (Mickey Rourke) in a struggle for the fate of humanity and the gods, and Tarsem clearly relished (and handily fulfilled) the challenge of one-upping the similar-on-paper stylings of 300.

Movieline sat for a chat in Los Angeles with Tarsem to discuss his honey badger status, the fact that Greek scholars may raise their eyebrows at Immortals, why 300's "cheap" visual style is so 18 years ago, and how the race to get his kid-oriented Snow White project out ahead of competitor Snow White and the Huntsman meant scrapping 3-D to be the first one out of the gate.

I saw you earlier this year bringing Immortals to WonderCon...

Where you there at the one in San Francisco, WonderCon? That was the one where they told me, "You need to go to training school."

I remember the t-shirt you made that said, "I've been media trained!"

Yes! I said I'll go if I can wear this shirt. But nobody asked me to take off my coat. Because you know what it said on the back? In the front it said "I've been media trained," and in the back it said, "Fuck off." But nobody took a picture! That would reflect me, so they said, "Okay, you can do it -- but go for the media class."

After that, I described you as the honey badger of film directors.

You're the girl! That's everywhere! Everybody sends it to me, thank you so much! I had about a million of them everywhere. Thank you!

It was my pleasure. But I'm curious to know; what is your attitude and approach to doing all this media, of putting yourself out there and yet having to temper what you say to a degree?

If I had to control what I was speaking, it would be a chore. Right now I just feel I've got my shoes off, everybody comes in, I talk. If I was an actor it could be a problem, but right now I just talk all the crap, I can badmouth anybody I want, I can say what I want and move on. I don't have to put on a front. If I had to, it would be difficult and tiring. It ain't; I'm just meeting people and telling them what the process was, so it's not like pulling teeth. It's absolutely fine.

It can't be like that for most directors, though.

It isn't because they get media trained. [Laughs] Or something happens where... I know right now I get the call every now and then when they say, "Everything's okay - but lay off saying the word 'gay.'" And I said, really? Why? Some of my best supporters are that! They say, "Well, they might take it out of context," and I'm used to that. They always take my stuff and make it sound horrendous. And if they quote the whole thing they'll know that I just don't take any of this seriously.

It's interesting to discuss this on the occasion of Immortals, because Immortals is your most mainstream work to date. You're this indie maverick. This is a big studio movie.

But at the same time, anybody who knows me knows I'm there through and through in [the film]. So I just went in and said... there's only that would have been a problem and I wouldn't have done any of the press, I would have gone out of my way to bury everybody with it, when they had a chat about how, if possible, they could make this movie PG. And I just said, you'd have a ten-minute movie and a really mad guy who will kill everybody who comes in. Slowly they talked themselves out of it, and finally when it was finished they screened it for the kids. There are different sides to me; I wanted to make a personal film but I would not want to make any film that does not reflect me in it. At least, not right now. I'm just too young to be doing that.

I love that! But for me, when they asked me on the PG-13 movie that I'm making [Mirror, Mirror], "Do you want to make it edgy?" No! Because when I make it edgy, nobody's going to see it. I love the idea of making a movie for kids but it's got to be that, with my take on it. And "edgy" is such a bad term. I kept telling them "edgy" is usually what people do when they make ads and they couldn't get the job, you would say, "I'll make it more edgy." I'm thinking, edgy for who? Edgy for me? For Disney? For Gaspar Noe? Do you want a rape scene, what do you want? So I said, no, it's a kid family movie. I want to make that. And they said, "Great," and left me alone.

It really helped that I had someone like Julia [Roberts] on my side, she was like, "Stay away!"