Another still from Simon Curtis's drama My Week with Marilyn has surfaced, this time showing Michelle Williams swimming as the iconic bombshell. Click through to see the latest, semi-scandalous photo and hang around for more Buzz Break. 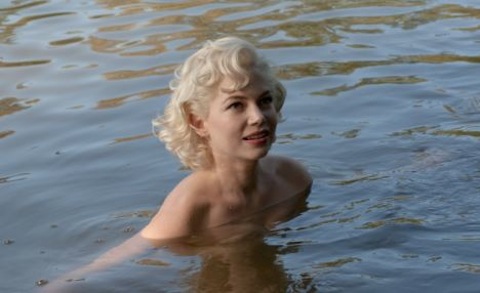 [via CinemaBlend via DailyMail]

· Steve Carell will go very dark for his next project Foxcatcher, which will be directed by Moneyball's Bennett Miller. Carell will star as paranoid schizophrenic John du Pont -- the heir to the du Pont dynasty who was convicted of murdering Olympic wrestler David Schultz. Miller's breakout feature Capote won Philip Seymour Hoffman an Oscar. Moneyball is earning Brad Pitt early Oscar buzz. Do you think Foxcatcher will be Carell's shot at an Academy Award? Discuss! [EW]

· If you've considered collaborating with Seth Rogen, consider this first: "I either get people started smoking weed or I put them out of business smoking weed," the 50/50 star said in an interview recently. "I'm either your first or last." [MTV]

· If you don't have plans tonight or Saturday, consider seeing Bad Teacher on Sony's dime. [Sony]