Believe it: It's awards season. Very early in awards season, to be sure, but time nevertheless for Movieline's Institute For the Advanced Study of Kudos Forensics to reopen its doors and initiate the algorithmic sequences and other complex formulas resulting in the latest edition of our annual Oscar Index.

As noted a year ago in this space, the Oscar Index is a weekly feature dedicated to parsing the latest and most sophisticated punditry about the awards race leading up to Hollywood's biggest night. The goal is an objective read of a landscape littered with spent hype, dirty tricks, aggressive campaigning, and the occasional mink-coated Glamour Shots. The methodology is simply to listen carefully, observe trends and exhaustively read every single thing written about the awards contenders as the season unfolds. And the results? Not bad! Just ask Jacki Weaver. 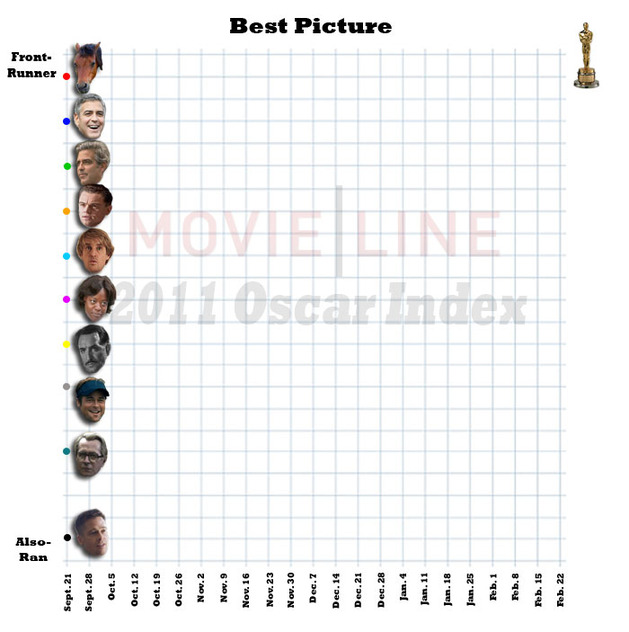 2. The Ides of March

Outsiders: Extremely Loud and Incredibly Close, The Girl With the Dragon Tattoo, The Iron Lady, A Dangerous Method, Contagion

Obviously the rule change in Picture -- five to 10 nominees, with a 5 percent of first-place votes required to make the cut -- means that we have literally no idea who's on the bubble this year. Even in January we'll probably be wondering who, if anyone, qualifies for a sixth spot, seventh spot and/or beyond. So regarding the above, please understand that I'm not necessarily projecting 10 nominees; I'm just projecting the top 10 contenders for a nomination based on that aforementioned survey of the punditocracy.

And did I mention it's early? Where last year at this time we had already seen the clear Best Picture frontrunner by the end of the Toronto Film Festival (indeed, The King's Speech won the fest's audience prize; this year that award went to a Lebanese import), this year we're reduced to remarking how wide open the field remains with such question marks as War Horse, Extremely Loud and Incredibly Close, The Girl With the Dragon Tattoo and J. Edgar (which now at least has a trailer) still months from being seen.

In fact, you could argue at this point, as Kristopher Tapley smartly does, that the surprise hit The Help remains the film to beat perception-wise. Think about the crop of August heavyweights to flex their muscle in the 2009 Oscar derby -- Inglourious Basterds, District 9, Julie and Julia -- and how long a shadow they cast over that year's festival crop. Moreover, look whom The Help is going up against as among the strongest festival contenders to date: George Clooney, whose Ides of March and Descendants have each received Oscar backing from the likes of everyone from Dave Karger ("[I]f you ask me, we now have the first sure-thing Best Picture nominee on our hands," he wrote from Venice about Ides) to Andrew O'Hehir ("More of a muted, bittersweet Hawaiian-themed cocktail than a masterful cinematic experience, Alexander Payne's new family comedy-drama The Descendants clearly emerges from the Toronto International Film Festival as a leading Oscar contender").

Of course, that was the same kind of broad, front-running momentum Clooney and Up in the Air left Toronto with in 2009, and we all know how that went. It's not altogether unlikely for either/or/both of Clooney's 2011 awards-season entries, either: "[Ides s]hould be respected across the board," notes Gregory Ellwood "but Sony is going to have to campaign hard to land the 5% votes they need for a best picture nod." Time critic Richard Corliss, meanwhile, underscored another bottom line for many viewers (and voters) of influence in Toronto: "What The Descendants couldn't quite match were the high expectations on which it floated into town."

Most interesting might be awards wizard Steve Pond calling it early for The Descendants despite a caveat the size of a Chrysler: "I don't see a Best Picture winner in this year's crop of films. Instead, I see reasons why every single film deemed to be a contender will probably fall short." The reality will ultimately vary; this declaration came after films like The Help, Midnight in Paris and The Tree of Life had earned their summer wings and prior to the Oscarrific raves for Tinker, Tailor, Soldier, Spy and the ongoing questions facing ostensible contenders Moneyball and The Artist. It's a skepticism that reflects the general consensus that this probably a quintessential studio year: That the less we know about something today, the more formidably it can tower over the horizon. Think True Grit or There Will Be Blood... or War Horse.

Frankly, until Steven Spielberg's most lip-smacking awards bait since Munich is officially rejected by the Oscar cognoscenti, it's the only probable contender that has yet to be compromised: No fetish-y marketing, no biopic-y hamfistedness, no Jonathan Safran Foer-y self-awareness. Instead it's got a horse, a World War (the first, Holocaust-less one, but still), some kids, beloved source material and tons of ambition. And, well, Spielberg.

So while, on the one hand, every Best Picture winner since 2007 (and five of the last six) has gone through Toronto, on the other we've got everyone looking back at Toronto wondering what the hell just happened. (Unless you're looking at Contagion, I suppose, in which case I just don't know what to tell you.) That suggests to me it's time to look forward. For awards season, anyhow, the best must be yet come. 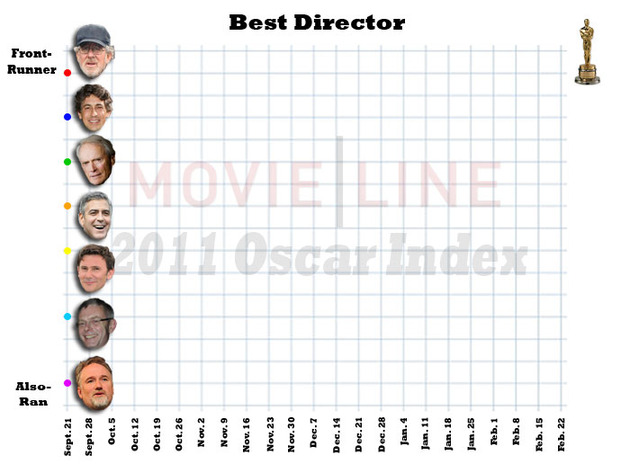 4. George Clooney, The Ides of March

With the exception of that refreshing cap at five nominees, most of what's written, noted and/or cited above goes for Director at this point as well. It's a mess -- competitive as usual, larded with prestige. A couple things to keep in mind, however:

· Daldry is a perfect three-for-three in this category in his feature-directing career, and there's no real reason yet to consider he couldn't go four-four.

· ""It seems safe to say that, right now, the only sure bet is Alexander Payne for The Descendants," writes Sasha Stone, and she's right. Fox Searchlight pretty much has its director game down to a science: pick one, and push. It usually works, and this year, as we've seen from Toronto, Payne is that director.

· If Harvey Weinstein really wants an awesome awards-campaign advantage, he should consider developing a keyboard shortcut that allows the awards press to bypass typing "Hazanavicius" over and over again for at least the next four months.