What do you get when you take the cartoon/live-action interplay of Who Framed Roger Rabbit?, remove the classic WB/Disney characters, and replace them with loud, gurgling, predatory sexual freaks? You get goofy gonorrhea and the 1992 bomb Cool World starring Moneyball-er Brad Pitt, a perverted young Gabriel Byrne, and Kim Basinger, an Oscar winner who exhibits the dramatic range of Claudia Schiffer. This movie's bad because it's drawn that way.

The idea of Cool World is intriguing, particularly in the hands of pioneering animation director Ralph Bakshi, who gave us the X-rated coup Fritz the Cat in '72. We're dealing with an underworld where cartoons and live-action humanoids (called "noids" here) interact, saunter about suggestively, and exhibit a frightening horniness unseen since Alan Alda announced he had a "terrific hard-on" in Same Time Next Year. Yikes. 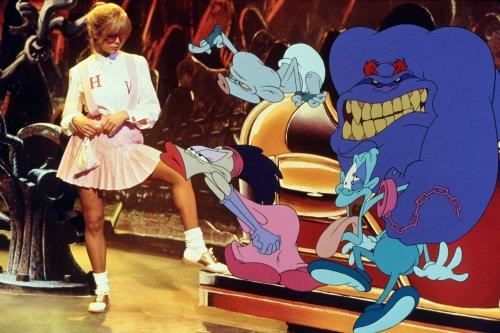 In Treatment star Gabriel Byrne plays incarcerated cartoonist Jack Deebs, a kook who is zapped into the very cartoon world he created, "Cool World." There, he encounters his curvaceous, nymphomaniac heroine, Holli Would (Kim Basinger, who shifts in and out of cartoon form) and a hard-bitten detective named Frank Harris (Brad Pitt), who is about as emotive as a sleep-deprived Kellan Lutz. The rest of the plot is anyone's guess. I think the raunchy toons take over? The cartoonist is in trouble? Kim Basinger is wearing an awful pink, pleated outfit? Jessica Rabbit dismisses the whole movie with a flick of her mane? The freakshow of Cool World becomes so random and ridiculous that it all blends together like runny paints on a palette, but there's no mistaking the lovable badness when it jumps on-screen. Here are Cool World's five stupidly great moments.

5. Did I mention that Gabriel Byrne wants to nail his drawings?

In the following sequence, Byrne lands in Cool World and reaches madly for Holli, who is undulating like a teenage runaway on MTV's The Grind. If the frenetic, synchronized dancing of the other cartoon characters doesn't give you nightmares, the hair-raising music should disturb your subconscious with the fury of a possessed chainsaw. The idea of wanting to screw a cartoon -- particularly one drawn by the artist himself -- is confounding. Can you picture Jack Dawson finishing his sketch of Rose Dewitt-Bukater, dropping the sketch on the floor, and humping it in front of her? Or Paula Abdul writhing atop a cocky, suspendered MC Skat Kat? Straight-up, this movie is twisted.

Cool World should win hundreds of Oscars, Saturn Awards, and Purple Hearts for its insistent use of drawing puns. The terms "pencil dick" and "doodles" are whipped around like racquetballs. I hope real cartoonists appreciated this. I can just picture Garry Trudeau experiencing a sexual rush as Holli salaciously traps other toons in a pen, or Charles Schulz surrounding himself with Pigpen clouds of pheromonal incense.