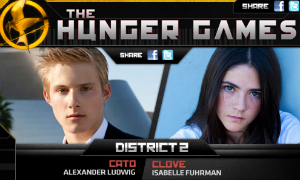 At long last, the announcement of the final two tributes in Gary Ross's The Hunger Games brings Lionsgate's ridiculously drawn-out casting search to a close. After the jump, meet the familiar teen faces who'll portray intimidating District 2 tributes Cato and Clove, two of the more fearsome adversaries Katniss (Jennifer Lawrence) and Peeta (Josh Hutcherson) must face in the arena.

14-year-old Isabelle Fuhrman has been cast as Clove, the female tribute from District 2. Cunning and a bit twisted, Clove is an expert with throwing knives and proves to be a major adversary during the Games. The petite Fuhrman, meanwhile, showed her dark side in the 2009 horror pic The Orphan; if you've seen The Orphan, you know this is a girl you definitely don't want to cross.

Clove's male counterpart, Cato, will be played by 19 year-old Alexander Ludwig, previously seen in The Seeker: The Dark is Rising and Race to Witch Mountain. At first glance, Ludwig doesn't quite seem to fit the part of Clove, who's written as a hulking, physically intimidating warrior. But Cato is a pivotal character in the climax of the story, and perhaps Ludwig showed Ross & Co. something special that makes him right for the part.

In any case, Cato and Clove being "career tributes" means they've been raised and trained from birth to compete in the annual Hunger Games and are all the more lethal and bloodthirsty for it. Of all the tributes announced so far, these are the ones who pose the biggest threat. At least with The Orphan on board we're guaranteed a few shivers.