Say what you will about Lionsgate's slow trickle of a casting roll-out, or director Gary Ross and novelist Suzanne Collins' choices -- Elizabeth Banks might just be the most perfectly chosen member of the Hunger Games cast thus far. Tweeting today to confirm her official involvement, Banks' enthusiasm leaped off the Twitter page as she quoted her soon-to-be onscreen alter ego, Effie Trinket.

After teasing her followers with a "Name That Quote" game ("Guess who said this: 'I'm smiling at you even though you're aggravating me'"), Banks posted Effie's signature line: 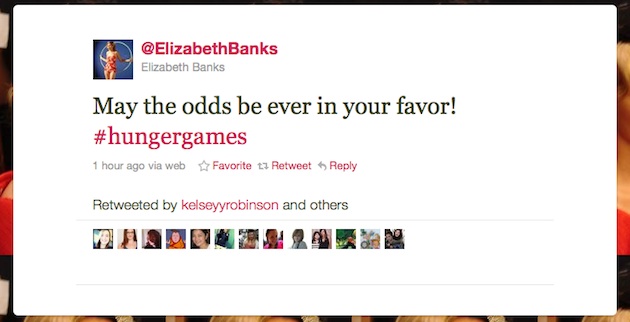 Perfection! I can picture her as Effie already.

And in other news, Lionsgate also announced their latest tributes. Playing the pair from District 4 will be Ethan Jamieson and Tara Macken. We'd wish for the odds to be ever in their favor, but...