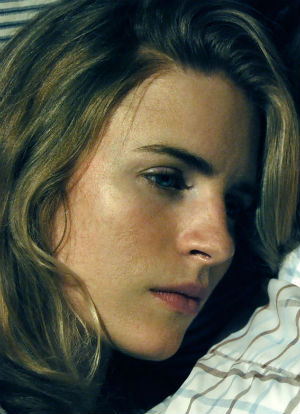 It's Brit Marling Day at Movieline! Since you'll be seeing a lot more of her in the near future, take a gander at the new trailer for Another Earth, the first of two Marling-starring Sundance flicks coming to theaters courtesy of Fox Searchlight. Alternate planets, tragedy, romance, and Marling's captivating screen presence -- it's all here. As a bonus, it's also got Ethan from Lost! Bet this ends better.

In Another Earth, a planet has been spotted that turns out to be, yes, another Earth -- a mirror world where different versions of everyone exist. Marling plays a young woman who, having been responsible for a terrible accident years before, grows close to the man whose family she inadvertently killed (William Mapother) and wonders what her alternate life would be like on the other planet.

Quiet, contemplative snatches of scenes, a melancholy score, Marling's disheveled hair catching in the wind -- it's all just gorgeous. Director Mike Cahill co-wrote the film with Marling (who also co-wrote and produced her other Sundance pick-up, Sound of My Voice, with director Zal Batmanglij) and filmed on a modest budget, but the handheld aesthetic seems to lend itself to the small-scale, intimate character work despite the science fiction set-up.

VERDICT: A must see, especially as it marks the debut of the talented Brit Marling. Fox Searchlight will open Another Earth on July 22 in limited release before expanding in fall.

If the embed gets pulled down, head over to Apple for a look at Another Earth in HD.