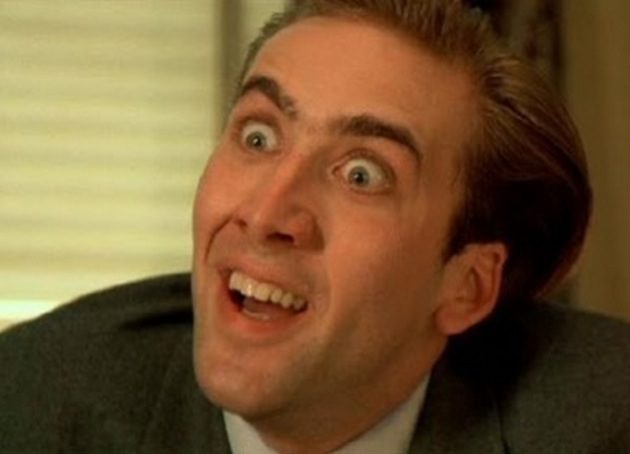 Some actors are Method; others make up their own method. Like Nicolas Cage, who described his self-taught school of acting and held Movieline rapt with 8 other stories about crazy sex scenes, driving 180 mph on the highway, making the Oscars fair, and other Cage-y anecdotes only vaguely related to his latest vehicle Drive Angry 3D, a high-octane Southern-fried supernatural vengeance thriller disguised as homage to the car-obsessed exploitation flicks of the '70s.

Cage stars in Drive Angry 3D as a man who escapes from hell and hitches a ride with a feisty waitress (Amber Heard) to hunt down the psycho cult leader (The Twilight Saga's Billy Burke) who killed his daughter and plans to sacrifice his baby grandchild to Satan. His name is Milton, because of course. If this sounds like your kind of Nic Cage movie, you're in for a treat. Read on for nine gems of wisdom and candor Cage dropped on unsuspecting press while talking up Drive Angry 3D this week. (Warning: Mild spoilers follow.)

On his infamous Drive Angry 3D sex scene: Cage's raciest moment in Drive Angry 3D comes as he engages in a shoot-out while already engaged in intercourse with a fully naked blond (Charlotte Ross). To the average viewer, the scene might be a straightforward scenario designed to blow young male minds, but Cage put a lot of thought into his character for the sequence. "I was thinking of Kama Sutra positions and what would be a position that would show Milton's sort of anti-divineness because he's not a divine Hindu spirit," Cage explained. "He's something from hell, a living dead man from hell. So then the idea of being in the clothes before a gunfight enjoying all the vices, the cigar and the Jack Daniels and the sex to me seemed like it would ring true for a guy that just broke out of hell. So that's how that scene came together... and then Ms. Ross and I enjoyed a bucket of Kentucky Fried Chicken after the scene."

Cage once drove 180 mph on the freeway: Cage likes to drive fast, if not necessarily angry. "Well, Amber [Heard] is still raising her eyebrow at me because I said that I've been 180 miles per hour on the 405 freeway on a motorcycle and she doesn't believe me but it's a true story. I did it coming home from work at 3 in the morning on another movie I made about cars called Gone in 60 Seconds. I bought a Yamaha-1 and I was doing 180 miles per hour home on the 405 and that's really, really crazy but I did it."

He developed his own acting method, and it's called Nouveau Shamanic: Cage formally studied acting for about six months and looked to thesps like Robert De Niro and then Laurence Olivier as models at various points in his career. But then: "By the time I got around to Vampire's Kiss and then Bad Lieutenant and now this movie, Drive Angry and then also Ghost Rider: Spirit of Vengeance, I had realized that I'd developed my own style and process and school of acting which is called Nouveau Shamanic. That's the new style of acting and at some point I'll have to write a book."

Ever wonder what Nic Cage's ringtone would be?: Cage got a call mid-interview, treating the press conference to the dulcet sound of... bells ringing. Turning his cell off with an apology, he explained. "You like the ringtone, right? I like bells. I like bells."

Cage brought his own poetic influences into Drive Angry: Never let it be said that Nic Cage sleepwalks through even the cheesiest of his films. One scene in which his character drinks beer out of a fragmented skull came directly out of Walt Whitman. "Believe it or not, I was reading a lot of Walt Whitman at the time -- our poet laureate, Leaves of Grass -- and somewhere in Leaves of Grass Whitman just says in a stanza 'drinking mead from a skull.' I thought to myself, 'I like that. I would like to find a way to drink beer from a skull in this movie.' And the reason being partly because I wanted Milton to have this kind of Celtic and Wotanic kind of modern primitive style about him. And also I wanted to see if there could be any way in my presentation of the skull; I put a lot of thought into that, even did a few takes of it almost like a beer commercial to find a way to make the beer slosh out of the eye in such a way that my cup runneth over and have it look really inviting and appetizing and make people in the audience go, 'Wow, I know it sounds crazy, but I'd really kind of like to drink beer from someone's skull right now.'"

Cage on why he said yes to Drive Angry: "Well, initially what I was attracted to was the idea that I was going to get my eye shot out. The movie Season of the Witch, I wanted to get my eye shot out with a bow and arrow, and the producers didn't go for it. We never really got there. Even though they said they would, it never really happened. So when Patrick Lussier said to me, 'You're going to get your eye shot out in a movie,' I don't know why but I just immediately said yes, I'm in, because it was something that I wanted to do. It's as simple as that."

Cage on how to make the Oscars fair: "How do you say one actor is better than another actor," asked the Oscar-winner, who nabbed the Best Actor award for Leaving Las Vegas. "You can definitely say that in the Olympics if it's the same race and someone wins the race. The only way to really do it and have it be sincere would be if you get all the actors together and they're all playing the same part and then you rate which one made you feel the most. Otherwise it's subjective."

Why does he do so many supernatural movies?: Because regular old dramas are too boring and limiting for the Cage. "I like fantasy. I like horror, science fiction because I can get avant-garde with those performances in those movies. Inherently, I'm able to be abstract and 'modern art' if you will because the movies are inherently out there and I can still connect with audiences. I can't do that in down and dirty dramas. I can't do that unless I go outside the box. Or, if I'm playing a character who's on drugs like Bad Lieutenant, then I can get pretty out there. Otherwise I have to look at supernatural movies or science fiction movies to get more avant-garde."

Ghost Rider 2 is going to be 'amazing,' according to Cage: The actor just finished filming the comic book sequel Ghost Rider: Spirit of Vengeance with new directors Mark Neveldine and Brian Taylor, who left quite the impression. "It's just really fresh and original," Cage enthused. "Mark is like a stuntman, camera operator, director all rolled into one. He's literally risking his life to get shots. On roller blades, on bungee cords, he's even patented the roller blading stuff because no one else in the business is doing it. And then Brian Taylor is just a walking encyclopedia about movies. We've had great conversations about all kinds of films whether it's Brian De Palma or Ishiro Honda."

"[Taylor] is the reason why I played Ghost Rider. He encouraged me to be the Ghost Rider as well as John Blaze. We got up to some stuff as Ghost Rider that the two of us designed together that I think is really going to mess with people's minds. It's not going to be like any other comic book movie you've seen. We keep stressing that Ghost Rider is the most supernatural superhero of all and that's really going to come out in this movie."

What The Kal-El? The Seriously Weird Superman That Nicolas Cage Almost Played