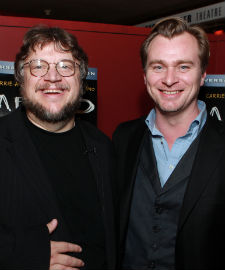 The filmmaking process and a particular studio head's cojones were among the topics of discussion Friday night when director Guillermo del Toro (Hellboy, Pan's Labyrinth) held a Q&A with Christopher Nolan (The Dark Knight, Inception) to celebrate the 10th anniversary Blu-ray release of Nolan's breakout film, the neo-noir psychological mystery Memento. But while the sold-out crowd at L.A.'s Egyptian Theatre got to witness the playful Del Toro warming up straight-laced Nolan like a looser, geekier James Lipton, a few topics were strictly off-limits.

Namely, Batman and The Hobbit.

Of course, the ban on superhero/franchise chatter left the fan boy contingent disappointed (Del Toro himself declared a moratorium on the topics off the bat: "We have four questions, and they cannot be about Batman or The Hobbit!"). And while the word "Oscar" never exactly came up, Del Toro and Nolan spoke often of Inception, Nolan's 2010 sci-fi thriller nominated for eight Academy Awards.

Needless to say, there were plenty of subjects that Del Toro and Nolan chose not to address. But what the two auteurs did share with the audience was the stuff of cineaste fantasy: candid talk of motivations and shared influences, acknowledgment of professional fears and artistic choices, with enough mutual admiration and camaraderie on display to make us hope that this geek-dream odd couple -- who nearly collaborated on Nolan's Superman reboot -- might find a way to finally work together one day. (Del Toro to Nolan: "It's daunting to think that [Memento] is your second feature; it's scary and I kind of hate you.") And of course, plenty of Memento memorializing abounded in honor of the film's upcoming Blu-ray release (February 22). Dive in for the highlights:

10. Nolan has never seen the re-ordered cut of Memento.

One of the best Easter eggs on the original DVD release of Memento ("A great artifact," applauded Del Toro) is a hidden cut of the film, re-edited in chronological order. When it came to him for approvals, Nolan only watched the opening sequence in reverse: "What I got a kick out of was David Julyan's music, for the first time in his career, became happy when it was played backwards... so I said, 'You can put that on there, but only as an extra.'"

9. Nolan on the similarities between his films and the works of Argentine writer Jorge Luis Borges:

"I'm a huge Borges fan. I think Inception is very much inspired by things I've read of his; I think Memento is a strange cousin to Funes the Memorious - about a man who remembers everything, who can't forget anything. It's a bit of an inversion of that. What I was after was sort of the precision of a Borges story. I think his writing naturally lends itself to a cinematic interpretation because it is all about efficiency and precision, the bare bones of an idea."

8. On Bob Berney, who took a chance releasing both Nolan's Memento and Del Toro's Pan's Labyrinth when other distributors balked:

"He is a man with a high testicular content," Del Toro added, recalling his own experience with Berney, who released Memento while at Newmarket Films and distributed Pan's Labyrinth via Picturehouse. "He said, 'I like it' when everybody was saying it was difficult, it's not going to find an audience, it's too complex."

7. Nolan on why there would be no Inception without Memento:

"It took a long time to write, and for me to learn how to make a film on the scale that I needed it to be. But it was born of a belief, when I sat at the Toronto Film Festival and watched Memento with an audience and heard them responding to it in a very mainstream way -- a very clear-cut, communicative relationship between the audience and the story. I felt like you could do that on a big scale. You could do a big version of that and people would get it, would respond to it."

6. Del Toro and Nolan agree: The best actors are "restless until [they] find the truth."

"I think the best actors are," said Nolan. "Guy, Christian, Leo -- they are restless. They're looking for something, they're looking for the essential truths of the character. When they find it, it's a wonderful thing to watch an actor settle into that."