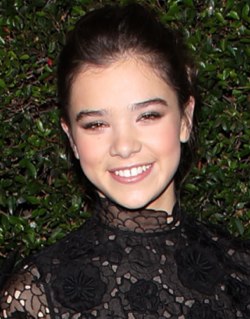 Barely a week past her 14th birthday, Hailee Steinfeld has accomplished a fistful of feats most of her Hollywood contemporaries would kill for. Starting with this week's True Grit, she makes in her feature-film debut as the female lead of a Coen Brothers movie. Grit's studio Paramount, meanwhile, has Steinfeld at the front of the Oscar pack in the Best Supporting Actress category. And then there's the little matter of whom she's supporting -- and whom Steinfeld matches scene for scene, tone for tone, line for dense line.

Opposite Academy Award incumbent Jeff Bridges, Steinfeld stars as Mattie Ross, a willful, fearless 19th century Arkansan teen seeking vengeance for her father's murder at the hands of Tom Chaney (Josh Brolin). Rebuffed by her elders at their peril, her quest commences in earnest upon meeting veteran lawman and trigger-happy lush Rooster Cogburn (Bridges) and the more upstanding if officious Texas Marshal LaBeouf (Matt Damon). Together, anchored by source novelist Charles Portis's dark, textured humor and framed among the Coens' own unforgiving Western tableaux, the trio ventures off for its man -- a couple of hound brains and fragile egos sustained by Mattie's fierce frontierswoman heart.

Chosen from more than 15,000 girls who submitted audition tapes, Steinfeld has previously described her casting as akin to winning the lottery. Perhaps, though the Coens may have been the lucky ones, landing a young actress with the resiliency, sensitivity and pure chops to pull off as complex a woman as any in the filmmakers' canon to date. Steinfeld sat down with Movieline to discuss her road to True Grit, skirting awkwardness with Matt Damon, the all-important Next Role, and an impromptu Coen Brothers movie-reference lightning round.

How's this all going for you? Having fun?

Yes! Are you joking?

OK, so, forgive me, but for the record: What's your background?

When I was 8 -- well, up until that point I'd tried every kind of sport, every kind of dance, and I never stuck with anything. And when acting came along it was something where I found different inspirations that really pulled me in -- one of which was a family friend of mine who was in a school play called Philemon. Her name was Jessica. I was watching her, sitting a few rows back from the stage. And to watch someone I grew up with -- or am still growing up with... I mean, at that time, I didn't know what acting was. Just to watch her was really inspirational and led me to belive it was something I could do. Knowing somebody. After that I went to my Mom and asked her if I could start acting. She made me study for one year. I took classes, and after a year I went back to her, and we got an agent, and it's been however many years. Six years?

And the True Grit comes along, and 15,000 young actresses go out for it. Why do you think you stood out?

You know, honestly, I guess I don't know. That's a question I think [the Coens] can answer better than I can. But I do think that when I was put on tape -- when I went in -- I was prepared. And I really think that's what it's all about, is being prepared when the time comes around.

With the material itself. I had 15 pages of sides, which is a lot of material. But it was so helpful for me because I had so many references at my fingertips. I had the original film, which I watched when I heard about True Grit. So right there I had the mindset of that era and the characters. That really was helpful. I didn't read the script until after I got the job, and I didn't read the book until after I got the job. But having those 15 or 25 pages of sides said so much about the character alone that I was able to work with it. Just in terms of how I was prepared, I knew the character. I knew the character's background.

Jeff Bridges has mentioned that you had some nerves on the set, but also that you weren't "nervous" per se. What are nerves vs. nervousness?

When I first heard I got the job, I was immediately jumping up and down, calling and texting all my friends. Then it got kind of emotional; "Oh my God, this is so surreal." And then, on the plane ride there, I realized, "Oh my God, I really have to do this now. I have to do this." It was kind of an intimidating thought. So going into it I was nervous. But the minute I met Jeff and d the Coen Brothers and all the other actors, realizing how easygoing they are and the fact that they're there to do a job -- and I'm there for the same reason -- just made me feel at ease. I feel like every day would have its own little challenge, whatever it was. Something would get thrown at me that I didn't expect, and I'd get a little nervous. But I get nervous for the craziest things. It's so funny.

Well, like the red-carpet stuff. I get so nervous! I'll get really nervous, and then everyone's like, "Hailee, snap out of it. You're not nervous." It's the weirdest thing, because I still get nervous!

It's not quite riding through a river on the back of a horse.

How early or late in the process did the Coens throw you into that?

That was actually the last week of filming. And that's what was so great about filming this: One day I was in a river with a horse, and the next I was 35 feet high up in a tree. You know what I mean? Every day it was something new. I'd be shooting a gun or whatever it was.

How many of your own stunts did you do?

[Thinking] Mostly all of them? I mean, there's not really a big stunt, is there?

You go flying down a hole...

Oh, the snake pit. That was a double.

It's me on the horse. Yep. In fact, the tree... I have a funny story about this. During, I believe, wardrobe fittings or rehearsal, getting ready to start filming, Joel kept coming to one of my wardrobe fittings, and he had his iPhone with all the pictures of our locations. And during the audition process, finding a girl who could ride a horse was a big deal. So during the whole process I was asked, "Do you know how to ride a horse? How long?" They were going to make sure I wasn't lying or whatever. So Joel asked me, "Hailee, are you afraid of heights?" And for some odd reason -- I do not know why -- I thought he was talking about a horse's height. And so I'm like, "No, not at all." This is a funny question! And then he shows me a picture of this tree I have to climb the next day. So I was a little freaked out by that. Other than that it was fine.