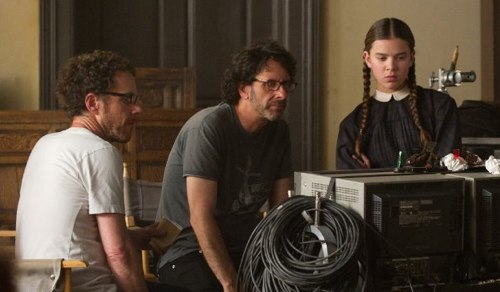 The dialogue in this film packs in almost Shakespearean levels of density and complexity. I mean, it's Charles Portis. What was your process of digging into this language -- and really finding Mattie in this language?

I have to say that when I saw the original, it really put me in the mindset of the language right there. Barry Pepper actually does refer to Portis as "American Shakespeare." It's like music. You put all the actors together in a scene and it just flows, the dialogue. I don't know. The stuff that comes out of her mouth is stuff you'd never hear come out of a 14-year-old's mouth. But I just had to go through it and make sure I knew what everything meant.

What did that entail?

Well, I'll go back to the audition process. I auditioned the first week in January; I was put on tape. I was called back two days later to meet with Ellen Chenoweth, the casting director. At that point they told us it would be a month if we were to hear anything at all. It was five weeks later I got called in to meet with the Coen Brothers. So during those five weeks, not knowing whether or not I was going to get a call back, I was still working on the material with a coach of mine. That five weeks was a lot of time I was able to take advantage of. And then, once we got on set, Joel and Ethan were always there to answer any questions. Or during table readings or rehearsals. That's where we found it.

There's a very... awkward relationship between Mattie and LaBeouf--

I mean, he all but makes a pass at her in their first meeting, and later, he's almost heartbroken to bid farewell. I'm curious how you and Matt Damon worked together to find just the right balance of sympathy and... whatever you want to call that. Was that weird?

As the character, it is kind of weird and awkward and mysterious. But Matt is so incredible. He's the best -- so soft-spoken, so gentle. There was never a point in the entire process where I felt intimidated by him. And my thanks to him: He never made me feel that way. He was always giving me encouragement, and that was helpful. I think a lot of it had to do with our offscreen relationship being great. We had about a week and a half of rehearsal before we started shooting, so we had that time to find the truth of the scene and really share our ideas on things like that. But that [scene] itself really isn't something we talked about.

You were born the year Fargo came out. When you realized you were going to be in a Coen Brothers movie, how much did that actually mean to you?

That's a good question. I was very familiar with the Coen Brothers' work going into this film, though I hadn't seen a lot of them because they're rated "R," and I'm not really allowed to yet. I feel like it means more to me now, obviously, after getting to know them. I can really appreciate what it takes to make an amazing film. So it means a lot more now than before.

So you still haven't seen a lot of their films? Like the R-rated ones?

Let's do a lightning round of Coen Brothers references: I'll say a phrase, you tell me the associated film.

Oh gosh. This is hard.

Oh, gosh. This is too hard.

Yeah, I think that's my favorite movie ever. A classic.

No! You're 14! You have the rest of your life to see No Country For Old Men. Anyway: Kim Darby, who originated the Mattie Ross role in the 1969 adaptation, has been vocal about hoping you make good choices after this film -- something she didn't necessarily do 40 years ago. Have you talked to her at all about the trajectory from here?

I did meet her recently after the L.A. industry screening. I didn't know she was going to be there. I get that question a lot -- "Have you talked to Kim Darby about the role?" -- but I never got the chance to. I thought it would have been really interesting if I had. But we did talk about that, actually. I almost started crying when I met her; it was very overwhelming to know she was there. But she was very pleased with the movie, and that was great to know. She looked me in the eye and said, "Please, for me, pick the right thing." She was very sweet.

Who else have you looked to for guidance? Have you had these conversations with people yet -- the big "What's next?" chat?

Not too much. I don't think it's something we're concerned with right at this moment. We're waiting for the movie to come out. It's definitely something that's going to come up. But we're really taking it one day at a time, and then we'll make sure whatever's next is the right thing. I think that discussion will be coming very soon.

Absolutely. Yeah, absolutely. I feel like every day I discover new actors and new filmmakers and different genres, and it's just so cool. It's so amazing to me how many different things are out there, and I think I've gotten the opportunity to do something amazing. It's funny, because I always get the question: "Who do you want to work with?" And I just realize how fortunate I am to have worked with the people I did. So if I ever got the opportunity again, it'd be an honor.