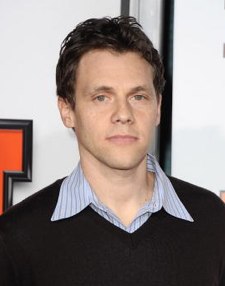 The upcoming Emma Stone vehicle Easy A is all about how one simple thing can change your reputation overnight, so what will the highly anticipated high school comedy do for director Will Gluck? In advance of the film's Toronto Film Festival premiere, Movieline talked to Gluck about his postmodern approach to comedy, his next movie Friends with Benefits (which is competing against two other projects that want to use that title), and the asthma attack-inducing power of the female orgasm.

There's a lot of online buzz about Easy A already...I feel like I read a post on Jezebel about it once every two weeks. Are you cognizant of that hype?

I try not to read the internet because it's mostly just a sea of hatred. [Laughs] But people have been telling me that, and it's very exciting, actually.

Every decade seems to have a really great female-led comedy, from Heathers to Clueless, to Mean Girls, and I think a lot of people are hoping Easy A will be in that tradition. Were those an influence, or were you trying to make more of a John Hughes movie?

Tell me how this script came to you. It was a hot script, but if I remember correctly, it was originally conceived as R-rated. Was there any conflict about making it PG-13?

Not with me. I read the spec and it was great, great writing, but I thought this movie could have a chance of having a lot of people see it, because it's about reputation and where you stand in your social standing. Frankly, most of the people going through that are in high school, so I always wanted it to be PG-13 and I rewrote it to broaden its appeal. There's no reason for it to be R -- it's a movie about sexuality with no sex. Also, I always like pushing the envelope with stuff, and when it's R, there's no envelope.

You say that it's a movie with no sex, but it does have Emma Stone faking an orgasm.

Oh no, she wasn't faking an orgasm! You misconstrued that. She was having a sneeze attack. [Laughs]

Still, is that the sort of thing you had to work with the MPAA on? They're notoriously afraid of the female orgasm, faked or not.

Look, I've worked with the MPAA in the past, and I know they're hyper-aware of teen sexuality. The one thing about this movie is that's it has a pretty nice message: Have sex when it's on your own terms, and don't tell everybody about it. So the MPAA was pretty supportive of it overall and helped us with stuff.

I hear that Emma had a very real asthma attack during that orgasm scene.

Yes, Emma did have an asthma attack. That's the most exercise she's ever done, probably. [Laughs] 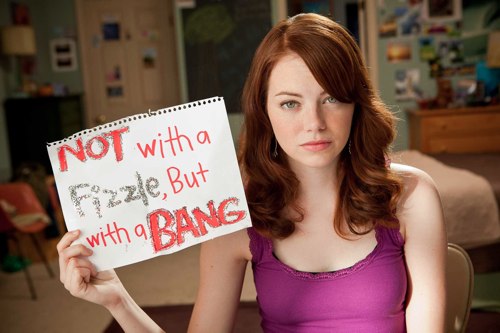 She's only gotten more popular since you made the movie, but did you have any trouble casting her over some familiar face from the CW?

No, because one good thing about Sony is that they knew that this was kind of a special movie -- a weird kind of movie, but weird in a good way. They never pushed anyone on us, and you've seen how good the cast is that we got for this movie, so they were very supportive about casting all the best people. The way I auditioned the [lead] role is that I had all the actresses come in, but then I had them all go home and do any page from the script into their webcam and sent it to me. Em went home that night and emailed it to me, and I walked over to the head of the studio with my laptop and said, "This is our girl"... If I were to put money on anyone, Emma Stone is going to be a gigantic star. She's the best actress and the best person I've ever worked with.

Some people may not expect a movie like Easy A from the guy who made Fired Up. Are you OK with that?

Yeah, I think it's a progression. I'm proud of Fired Up, and I think the people who saw it seemed to like it a lot. People who didn't see it didn't like it, which is always interesting. [Laughs] That movie is about sexuality, but there's no sex in that, too. So if you watch Easy A and then go back and watch Fired Up, I think you'll see that it's from the same guy.