Was your own high school experience as sexually fraught as your movies?

Easy A is the last film Amanda Bynes made before her retirement announcement. Did that surprise you?

The stock answer I'm giving on that is...well, you know that she's unretired, right? It actually speaks to the movie a little bit, that there's all this text messaging and one thing you say can get out instantly. I think it wouldn't have been a story two years ago when no one tweeted about anything, but now that everything's broadcast, stuff that shouldn't really become a story does become a story. I don't think she's going to retire. That's the thing about this: I tried to make a John Hughes movie -- and with all due respect, I know I didn't come close to making one of his movies -- and then you add in the internet, the social networking, the "every thought we have is broadcast" society that we live in, and every decision that you make now is much more magnified. 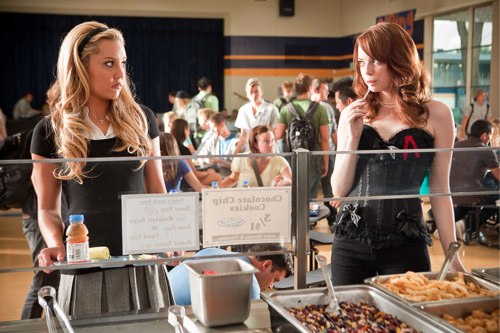 And The Loop, too. Here's the thing about the internet. [Laughs] I love that people on the internet are getting behind this movie, and I feel fortunate and humble that they are, but I've also seen it destroy things. When I did TV, I loved reading that real-time feedback, because everyone who posts on the internet has the potential for a great idea. The only thing about reading the internet for a feature film is that you're done with it, and they're commenting on stuff before they've seen it. My favorite thing that I did read about Easy A is that people are complaining about how Cam Gigandet is too old to play a high school student and how lame that is. You've seen the movie -- that's the point [of that character]!

You've been shooting your next movie, Friends with Benefits, starring Justin Timberlake and Mila Kunis, but Ivan Reitman is doing a comedy starring Natalie Portman and Ashton Kutcher and wanted to use that name, too. Who knew that this would be the next edition of "two comet movies coming out" or "two volcano movies going up against each other"?

It's crazy, yeah. That's so random. There's [an upcoming] TV show with the name, which is being run by my best friend, ironically. [Laughs] But the other film called Friends with Benefits is changing its name. It's kind of a weird zeitgeisty thing, isn't it?

Is it weird to you, after having paid tribute to those 80's movies, that you're now competing against a movie that Ivan Reitman is directing?

That's interesting. [Laughs] I've never thought of that, and it's funny -- in New York the other day, we actually shot in front of the Ghostbusters firehouse. But I think they're two very different movies.

I don't know. He has an incredible track record and I don't. How about that?

I really think it will help when one of them gets renamed. I mean, listen, every romantic comedy over the last twenty years is about the same thing, right? The two characters in this movie played by Justin and Mila are in this generation like you and me where they've grown up on romantic comedies. They comment about these romantic comedies throughout the movie, and as they go through their storyline, they realize that they're in a romantic comedy story -- as two regular people who aren't in a movie would comment on. They're very cognizant that they're in this story and they're like, "Oh, we know how this is gonna end," and they think they're gonna be different, but they end up embracing the fact that they're going through a romantic comedy moment. In life, I talk about movies all the time, but most movies tend to forget the fact that pop culture exists outside their movies. I'm totally embracing that. They know that they're in New York City, they know that they're going through this pat storyline of boy-meets-girl, but they kind of embrace that, and in the end Justin kind of turns it on its head and makes it a romantic comedy for Mila.

Easy A is kind of postmodern about teen movie cliches, too. Do you feel like you have to deconstruct a genre to build it back up again?

I think if you don't give a nod that this has been done before or this story is older than dirt, it kind of rings false. As soon as you give a nod to it, the audience understands that they're all in on the joke and they can be relieved and watch the story happen. I really believe that adage that there are only six stories to tell, so if you comment that this is one of the stories, I think it can be fun to deconstruct it.