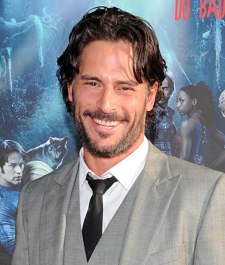 He's only appeared in two episodes so far, but as the werewolf Alcide, Joe Manganiello has made quite an impression on True Blood this season -- and it isn't just because at 6'5", he towers over costar Anna Paquin. As he told Movieline last week, sometimes even that positively dashing height can be a drawback.

Read on for more thoughts from Manganiello on his lovesick (but warm-bodied) wolf, the True Blood role he originally went in for, and why his upcoming nude scene may inspire cries of complaint.

Now that you're done shooting the season, can you sit back and enjoy the reception?

When I talk to most of the actors from True Blood, they say that they feel like they shoot the show in a bubble, because it's almost all done even before it starts airing. I wonder: Was that different for you, because there was a lot of scrutiny about this part and then a lot of fanfare right away when you got it?

Yeah, it is like being in a bubble, because the hours are so long and the episodes take so long to shoot. The other thing is that it's a huge cast, so all thirty of you meet together at the table read and then you go off in separate groups to shoot the scenes and you really don't get to see everybody. Seeing the episodes when they air is really neat because you have no idea what everybody's been doing for the last seven months.

Did you let yourself go online after your first episode to see how the fans received you?

I did, yeah. I couldn't help it, I did go. It seemed like everyone was pretty happy with Alcide.

What about you? How nervous were you to see that first episode after you'd spent months playing this character?

I'll admit that I was definitely a bit anxious to see it, because the show is a lot more complicated than it looks. I think people sometimes dismiss the show because, "Oh, it's a supernatural show with wolves and vampires running around," but it's really complex. Alan and the other writers are so good at writing these nuanced characters, and that alone is enough to play. Then aside from that, you get a dialect, and aside from that, you're a werewolf! You get in there the first day of shooting, and you think, "I'll either look really cool or I'll look like the biggest idiot on the planet."

What was this audition process like? Were you going in there for callbacks and there were a ton of big, hulking guys in the waiting room?

I'd actually been called in for a different werewolf role -- I went in and auditioned for Coot, and I was the first one up when there was no script or sides available for Alcide yet. It got whittled down to about five guys, and I noticed that the other four guys were very different from me. I kind of figured, "OK, maybe they're going in a different direction," and sure enough, they called me up and said, "You're not getting this part, but there's this other part that debuts in the following episode, and we want you to chemistry read with Anna Paquin for it." That was Alcide.

I was excited for it. Alcide was the part that I wanted, and I'd heard about it when a buddy of mine sent me a web link to a blog site for fans of Charlaine Harris's books. They were blogging about who should play these different characters who'd be showing up on the show, and sure enough, fans were posting pictures of me to play Alcide. That's how I found out about the books and found out there were werewolves in them, so I started pursuing the part of Alcide.

So how did you handle it? When you went in for Coot, did you say, "Hey, I heard you were casting Alcide..."?

I didn't say anything to them, I just was super-excited to get in and read in front Alan Ball and the rest of the producers. I would have been completely happy to play Coot, but the character of Alcide in the books is described as being physically like me. It's almost like a perfect match, so I was really hoping that Alcide would come up. It was my favorite show before I auditioned for it, though, so anything on the show would have made me happy.