Now this obviously is the perfect role for a 6'5" guy like yourself, since you're supposed to be huge compared to the other characters. But I wonder, has your height ever been a liability when going in for some roles?

You know, I think what it is is that I go up for leading man roles more, and I think if you audition for or are in the running for supporting roles, there are a lot of leading men out there who are shorter than me. It has to be the right part for me to be stuck standing next to a leading man who's a foot shorter! It's generally something people don't go for a lot.

Back in the day, all the Academy Awards winners during the 40's, 50's 60's...they were all super tall. For whatever reason, we live in an era right now where leading men are short, so I have run into difficulty at times because with the leading men on projects, my height is a concern. Luckily, on this show, the role calls for a big guy. It's kind of one of those tough things where I've kind of had to make my living as a character actor -- a lot of the parts I've played have been "romantic interest of blah blah blah," or "big crazy best friend of blah blah blah," or one of the bad guys. It has been kind of a tough nut to crack, but luckily on [True Blood], they wanted someone who could match up physically with Alex Skarsgaard. 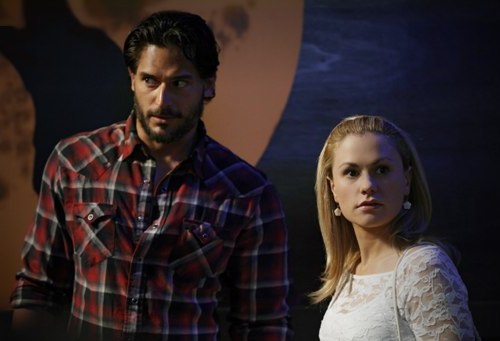 Alcide seems like a really decent guy in these first few episodes. Do we see dark sides of him as the season goes on?

He's in a bit of a dark place since his fiancee is going to marry the leader of another pack. We sort of get some backstory on Alcide and find out that he hasn't had the easiest time being a werewolf; it's been a bit of a burden, and it's forced him to be sort of a recluse. It's almost like he has a secret identity, in the way that Superman has a secret identity. He's born with this power that he has to hide from the rest of the world, and he looks at human beings to find out what "normal" is and then he pretends to be that. You know, dating as a werewolf is kind of tough. [Laughs] There are a lot of talks that you need to have.

How do you feel about a potential romantic relationship between Alcide and Sookie?

That's all up to the writers. I just do what they tell me!

[Laughs] The dialect, definitely. Where's this guy from? What does he sound like?

And what do you have to do to prepare for your nude scene? Is that treated like this really important day, or are they so over it on True Blood that they're like, "Yeah, we're not even bothering to close the set anymore"?

If [crew members] don't need to be there, they won't be there. With that said, [my nude scene] was in broad daylight in a field, and there were school buses of kids coming home at some point. There's gonna be some therapy bills down the line involved with that. You know, I think the crew was much more uncomfortable with it than I was. I kind of want to crack jokes and talk to them in between takes, and they just all stare at the ground. Still, everybody's super professional about it. How could you not be?

Lastly, Joe...you were a roadie for the band Goldfinger! How did that happen?

John Feldman, the lead singer, is one of my best friends in the world. He was going out on tour and he wanted me to come with him and just hang out, so he called me up and asked, "What are you doing for the next two weeks? Do you want to come on tour with us?" The dates all worked out, so I came on the payroll as security, which basically meant I had to throw drunk kids off the stage.

Drunk kids at a Goldfinger concert? I'm sure that never happened.