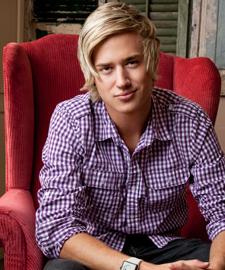 The Real World used to cast a bunch of slightly mismatched young adults with obvious ideological and cultural differences, but for the past seven years (give or take), they've chosen six archetypes and one totally toxic center. We had Ayiiia in Cancun, Paula in Key West, and now in Back to New Orleans we have Ryan Leslie, a Tempe, Arizona hairstylist who flits, fumes, and remarks about a female castmate's miniskirt, "You're just asking to get raped." Yep, a charmer on all fronts. And there's 25 more bullets where that came from -- just from last night's premiere! Can you name them? Ready? Go!

3. Arrives on a skateboard

4. Huffs at everything, can't believe what you just said

7. Is a hybrid of all three dudes from Million Dollar Listing

9. Saves girls who are drunk by yelling at them

10. Calls you trailer trash, waits for you to get angry, and then says, "Let's settle this RIGHT NOW."

12. Interrupts a cast member who opens up about a painkiller addiction by claiming that he used to "pop Xanax because my girlfriend used to make me so mad."

16. Can't believe you made a stupid joke about the bleach in his hair

17. Can't believe you introduced yourself by your last name when that's the name you go by

18. Can't believe you can't understand him

19. Said: "When people say something ignorant, I call them out in a second."

20. Can't be around polite Ryan Knight from Wisconsin because he is a "meathead."

21. Wipes a gay kiss off his neck like it's a locust (after accepting a drink and flirtation from the guy)

24. Says the word "Situation," which you can't do on Real World anymore

25. Covers up a lie about where he wants to sleep by saying, "I'm just keeping it real."