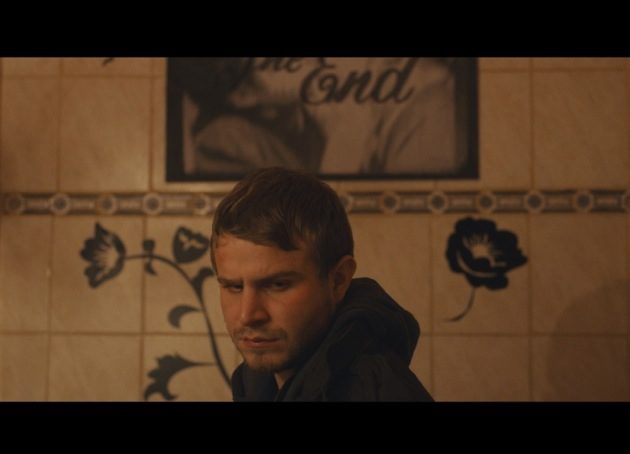 If Evil Dead isn't your idea of fun, then may I suggest a film about evil-in-the-making that also opens on Friday?  It's called Simon Killer, and it stars charismatic Brady Corbet as a young American up to no good in Paris. Simon appears to have traveled to the City of Lights to recover from a bad break-up, but, as this tense, visually striking film uncoils, it becomes  apparent that he's suffering a breakdown that will have lethal consequences.

Directed by Antonio Campos, who, like Corbet, was involved in another smart psychological thriller, Martha Marcy May Marlene, Simon Killer is unsettling because its title character seems so much like the charming but self-involved dude working in the adjoining cubicle next or sitting two seats behind you in class. And I sat down with Campos and Corbet to talk about how they created such an authentic character.

Movieline: Brady, a couple of times in the film, your character, Simon, talks about having studied the relationship between the eye and brain. You’re sending a message to moviegoers there.

Brady Corbet: It serves as a key to unlock a lot of the film’s mysteries.  The funny thing about a good metaphor is that you can take it very literally if you want.  And if you want to read into it, then it can take on all kinds of meaning.  The movie has an obsession with periphery: What’s happening in the periphery of the narrative?  What’s happening in the periphery of the frame?  What are you seeing?  What are these characters not seeing about Simon?  The whole movie is about perception, as a lot of great films that acknowledge the nuts and bolts of filmmaking are.  With all of Antonio’s films, you are very conscious of the camera.  And part of the fun of becoming that conscious of the camera is also becoming conscious of everything that’s not on camera.

Corbet: Antonio found this insanely haunting quote from van der Sloot. He was being interrogated or interviewed and he said something like…

Campos: If my mother had described me as an animal she would say I was a snake. But I’d like to be a lion, and one day I will be a lion.”

There's a similar line of dialogue in the movie.

Corbet: The funny thing  is that my mother had given me this fox pin right before we went to Paris so we swapped the snake for the fox.

Corbet: It’s very much how the whole movie was birthed.  We’d obsess over an element, and then we’d find some way to take that element or a theme or a story and incorporate it into the narrative.

Have either of you seen Crystal Fairy?

After seeing that movie at Sundance and Simon Killer, it seems to me that there’s this emerging genre of films that depicts young coddled and self-absorbed Americans abroad who, at the very least, are jerks, but, in terms of your character, Brady, can be something much more dangerous.

Why is this is emerging now?

Campos: I don’t know.  I think that our generation is very self-aware.  Even like a show like Girls is about this sort of coddled generation.  And what’s so clever about Girls is that Lena Dunham doesn’t let her characters get away with it. In the first season, there was always that moment where one of the girls would get called out for how superficial or narcissistic she was.

We live in a narcissistic, coddled culture. We build this whole universe around ourselves through our social media. And there are all of these studies out there about how upper management has to figure out how to be sensitive to the needs of young employees and treat them in a way so that they don’t get scared.  It’s all very strange, and I don’t know what the next step is.

HR will have to get back to you on that one.

Campos: My favorite moment in the film is when Simon calls his mom because it’s so incredibly human but it's also incredibly pathetic.  And you know it’s exactly something that someone of this generation would do if they committed a murder. He’d call his mother just to hear her say, “It’s going to be okay,” and, “Don’t worry, honey, you’re not that bad of a guy. “

Corbet:  Something else that is interesting to us: I’m sure you’ve experienced it yourself when you’re alone with other men and they feel like you’re in the same fucking boys club with them. They will make some horrible remark about the lovely young woman that just got up to go to the bathroom, and they feel they can confide in you because they assume that all men think and act like that. This movie is also conscious of characters like that who aren’t hard to find in New York City’s models-and-bottles culture. There are more than a few men out there that treat women like prey.

Campos: Brady said once said — and I think it’s very true —that the film is an exploration of what the word “whore” means to this generation. In fact, one of the few moments in the film that gets a laugh is when Simon refers to a past relationship by saying, “Whatever, she’s a whore.”  Whether there’s a theater full of people watching the movie, or one person in a private screening room, that line always gets a laugh.

Corbet: And when the audience laughs they implicate themselves in Simon’s mindset, which the rest of the movie then starts to tear apart. It’s part of the reason we wanted to have a fiercely intelligent female collaborator like Mati [Diop] come in and help us shape this story.  As you saw, the sexual dynamics and politics keep shifting in terms of who has control or who seems to have control in the movie.

That’s for sure.  I felt increasingly unsettled as the movie progressed. Whose idea was it for Simon to make those creepy growls during particularly stressful moments?

Corbet:  That was Tony’s idea. He was very cute.  He came to me and he said, “When you’re alone, do you ever make sounds?” And I was like, “I don’t know.  What kind of sounds?” And, he said, “I don’t know, like this. [Makes a low growling sound.]  And so we started trying to find weird places to incorporate it.

This also happened during terrible time in my life. I was going through a break-up and was really devastated. I was anxiety-ridden and wasn't sleeping very well at the time. I suffer from pretty violent panic attacks, and there are similar steps that you take when you’re dealing with one. You can do tapping, or some people moan into a pillow.  So, we started to really think of it in terms of the character.  [The growling]  could be some trick he developed from years of therapy that his fucking upper-middle-class family in New York City bought him, and it’s just not working. On a more reductive level, the film is ferocious, it’s carnal, and so the way Simon processes something is, he roars like a lion.

You don’t seem like the kind of filmmakers who would make a sequel to Simon Killer, but the set-up is certainly there.

Campos: I was just saying: We should do Simon in Buenos Aires; Simon in Bangkok.…

Corbet: Oh man.  Simon in Bangkok would be dark.

Campos: We could follow Simon on this adventure of ruining different women’s lives in different cities. And every city would be like a different scam. If we went the Joran van der Sloot route, he could be traveling around after being implicated in the death of this woman, right?  And then he goes to Bangkok and he gets involved in human trafficking.

Corbet:  Dude, I would not put it past us in nine years when were stale and have no more ideas.

Campos: We have an idea for a Martha Marcy May Marlene sequel as well, but that’s gonna be 20 years down the line.

Have you figured out the next project you'll do together?

Campos: We don’t know yet.  I’m going to act in something Brady does at some point.

Corbet: I’ve got a role with his name on it in my next film.

What does he play?

Corbet: I want Antonio to play an economist.

Campos: An economist. All right.