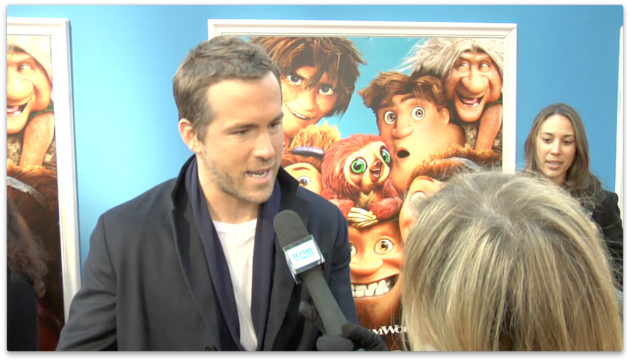 There is apparently no end to Lilo & Stitch creator Chris Sanders' talents, from doing a great Nicolas Cage impression to braving the bitter cold at the NYC premiere of The Croods - with no jacket!

Just how impressed was Ryan Reynolds with Sanders?  "This is my first animated movie I've ever done, and I was doing one subsequently right afterwards and I learned so much from [the directors] that I shifted the sessions in the next animated movie to feel more like this one!"

The Croods is director Chris Sanders' second film for Dreamworks Animation, where he defected to after clashing with Disney over American Dog. (The title became  Bolt after his departure).  Is he still enjoying his new home?  "Every film we make we get, like, better technology — so even better!"  Plus he's already hard at work on How To Train Your Dragon 2.

But his co-writer and director, Kirk De Micco, chimed in to say there was one area where Dreamworks Animation struggled — creating digital tar!   The request threw the animators for a loop.  "How deep is the tar?!  How sticky is the tar?!  Does it stick to their clothes?!"  Good thing Sanders and De Micco were there to answer their questions.