You Know, That Guy In 'Lincoln'....Hugh Jackman 'Forgets' Day-Lewis' Name 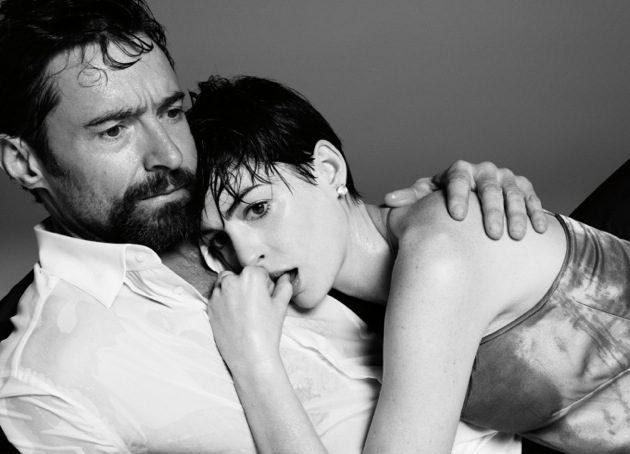 Here's a novel way to keep from getting worked up about your main Oscar rival: forget his name entirely. For Time magazine's Great Performances video feature on this year's Oscar nominees, Les Miserables co-stars and Oscar nominees Anne Hathaway and Hugh Jackman spend some time lauding their competition. Hathaway even praises the computer-generated tiger in Life of Pi. But watch what happens around the 2:09 when Jackman slyly raises the topic of Lincoln.

If you need any further proof that Wolverine a) can act and b) possesses a wit that's as well-developed as his pecs, keep a close eye on his poker face as he claims not to remember the name of Daniel Day-Lewis, who, according to conventional wisdom, will emerge the victor when the Best Actor Oscar is handed out on Feb. 24.

"Lincoln is the movie, but the lead guy who I always forget...," Jackman says to Hathaway without any hint that he's having a bit of fun. In fact, it's Hathaway who can't keep a straight face as she jogs Jackman's memory and he refers to Day-Lewis as simply "Lewis" — in case, I guess, any Academy voters will be deciding how to cast their Best Actor vote after watching this video.  Jackman does admit that the actor whose name he can't seem to remember is "awesome" in Lincoln though, and he also waxes enthusiastic about Joaquin Phoenix's performance in The Master.

You can also access video interviews with Amy Adams, Jessica Chastain, Sally Field, John Goodman, John Hawkes, Philip Seymour Hoffman, Quvenzhané Wallis, Christoph Waltz and  Naomi Watts at the Great Performances link above. In the meantime, here's a compilation clip.  Oh yeah, and take a close look at the photo of Hathaway  resting on Jackman's buff torso with her thumb in her mouth. Saucy.