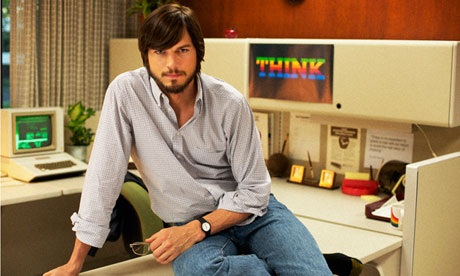 Ashton Kutcher not only took on Steve Jobs' persona as a tech magnate, he also adopted the late Apple founder's alleged fruitarian diet in preparation for the role, which sent him to the hospital, the actor revealed following the premiere of jOBS at the Sundance Film Festival over the weekend.

Often considered a subset of veganism, fruitarianism is a diet that consists of fruit, nuts and seeds, solely without animal products, vegetables and grains. Motivations for fruitarianism range from ethical, health, religious and environmental or other reasons.

"First of all, the fruitarian diet can lead to, like, severe issues," Kutcher told USA Today. "I went to the hospital like two days before we started shooting the movie. I was like doubled over in pain. My pancreas levels were completely out of whack. It was really terrifying…considering everything." Jobs died of pancreatic cancer in October 2011.

Kutcher said he spent hundreds of hours going over tapes of Jobs hoping to master his mannerisms and hunched walk. The actor, who has a massive Twitter following, said he felt close to the late magnate in part because they share an affinity for the "tech space."

"He's a guy that failed and got back on the horse," noted Kutcher. "I think we can all sort of relate to that in some place in our life where we are moving forward with something and we fall down. You have to have the guts to get back up and go again. I think I share that as well."

jOBS opens with the period Steve Jobs founded Apple in a garage in Palo Alto, California up to when he launched the iPod in 2001.

Oscar-winning writer of The Social Network, Aaron Sorkin, is also planning a Jobs biopic based on Walter Isaacson's bestselling biography. The Sorkin version will reportedly comprise of three extended scenes, according to The Guardian, each leading up to a pivotal product launch.