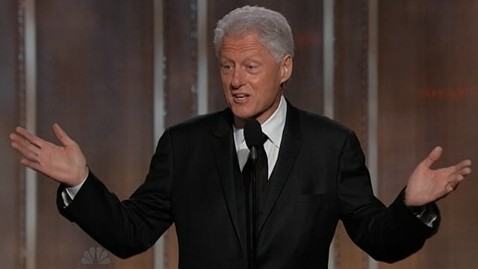 The Clinton on-stage appearance was kept very hushed to maintain the surprise. Also in Monday's round-up of news, Zero Dark Thirty tops the weekend's box office as it headed into wide release; the Golden Globes had their best ratings in years; the Berlin International Film Festival sets its co-production market; and Robert DeNiro will receive honors at an Italian festival ahead of the Oscars.

Steven Spielberg Behind Bill Clinton's Surprise Golden Globes Appearance
Lincoln director Steven Spielberg was the mover and shaker behind former President Bill Clinton's appearance Sunday night at the Golden Globes. Only a handful of people at the Globes knew the 42nd President was coming. To keep the secret, those who did know were told to say the surprise presenter would be Prince Albert of Monaco, Deadline reports.

Golden Globes Best Ratings Since 2007
NBC's airing of the three-hour live telecast of the Golden Globes Sunday night was up 12% over last year's showIn the 25 markets with Local People Meters, the telecast had a 25% rise in the key 18 - 49 demographic, Deadline reports.

Robert DeNiro to be Feted by L.A. Italian Fest
DeNiro will be honored by the Los Angeles-Italia Film, Fashion and Art Fest next month ahead of the Oscars. The event takes place February 17 - 23 at Grauman's Chinese Theater. DeNiro received his first Oscar nomination in two decades for his role in David O. Russell's Silver Linings Playbook, THR reports.