Apparently The Last Exorcism was a misnomer because I have here a trailer for The Last Exorcism Part II. Since the movie is not subtitled (This Time We Really Mean It), I'm going to assume that the finality of poor Ashley Bell's possession (and the future employment actress who plays her, Nell Sweetzer) will be dependent upon box-office results and VOD earnings.  I'm also going to bet that if there is a Part III, it won't star Sofia Coppola — that's a little Godfather joke — and the poster and trailer will feature images of an even more grotesquely contorted Sweetzer. 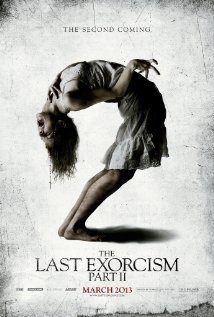 Perhaps Producer Eli Roth has struggled with lumbar or posture problems all his life, or maybe he was just really affected by the spiderwalking Regan scene from The Exorcist — I know, it wasn't in the original cut — but these Last Exorcism movies sure do love to show the possessee in pretzel-like poses that would make my chiropractor Dr. Alicia Klimkiewicz rub her hands with glee.

First, check out the poster, which is a less bloody version of The Last Exorcism poster that got banned in Britain in 2010. Then observe the spinal torture going on in The Last Exorcism Part II trailer and tell me your L5 doesn't hurt. Finally, for a little perspective, watch the two versions of The Exorcist spider-walk scenes I've posted below.  For my money, William Friedkin's 1973 horror classic was the last exorcism film I'll ever need to see.