REVIEW: Apatow Grows Up, Takes A Step Back With Messy 'This Is 40' 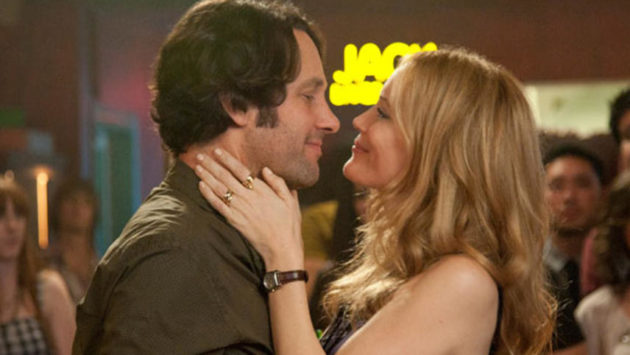 This is 40 ends with a title card saying that it's "Based on characters created by Judd Apatow." While this is true — the film's about Debbie (Leslie Mann) and Pete (Paul Rudd), who were supporting figures in Apatow's 2007 hit Knocked Up — it also feels like it might be more accurate for it to declare "Based on Judd Apatow." It doesn't just star his wife Mann, it features their daughters Maude and Iris as her children, and it's not hard to read Rudd's character as an Apatow proxy who's struggling through the world of music instead of, these days, riding high in comedy.

It's shot on the same block on which director/writer/producer lives with his family, and includes what are clearly many of his thoughts and experiences on relationships, parenting and getting older. It's Apatow's most personal film yet, even more so than Funny People, and it benefits from the closeness of this material to its creator as much as it suffers for it, though its weakest points are when the film strives for the angle indicated in its tile — This is 40 — and tries too hard to be about the universal ("This is everyone's story," the trailer boldly declared).

Its more general observations on aging and marriage aren't just familiar, they can take on the well-meaning but blithely entitled sensibility of a college sophomore who's finally lost his or her virginity and now feels qualified to hold forth about sex with the authority of Dr. Ruth. When Debbie forgets which year she's lied about being born in to avoid dealing with the big four-O and yells at Pete for needing a Viagra for their morning birthday hookup, or when we watch a montage of the pair getting different orifices checked out by the doctor during a physical, the film feels like a recycled Erma Bombeck column with some added iPad etiquette discussions to modernize jokes about bodies no longer working and looking like they used to.

This thing is, Debbie and Pete aren't like everyone — they're leading lives of comparable privilege and glamour, existing in an upper middle class world of gluten-free diets and spandex-clad road bike riding groups, of getting hit on by professional hockey players at a nightclub and throwing a concert to which Billie Joe Armstrong comes. They aren't an everycouple, which is fine — it's actually the specifics of their marriage and careers that, as the film unfolds at an overlong 134 minutes, make it compelling if more rooted in drama than domestic comedy. There's an underlying terror guiding their lives, one not just related to getting older but to the possibility of failing to hold on to their economic rung and their concept of a happy, healthy family. Debbie and Pete smile so hard, like they can will away their unhappinesses, which surface instead in bickering.

There's a lot of bickering in This is 40. Debbie badgers Pete and feels unappreciated by him while he sneaks cupcakes, loans money to his dad Larry (Albert Brooks) and hides the growing financial difficulties his retro record label is facing. An always perplexing aspect of Mann's place as Apatow's on-screen muse as well as his real-life partner is that the characters she's played in his films, particularly Debbie, tend to be so shrill you wonder if there's some concealed antagonism coming through. That's a tendency that This is 40 directly addresses, with both Debbie and Pete having joking conversations about the fantasies they've had about murdering one another. The openness of that discussion of how you can genuinely if temporarily hate the one you love, and how it's balanced by the easy unity Debbie and Pete have when defending themselves from another parent (Melissa McCarthy) at a school conference (the film's funniest scene), is a minor but welcome improvement from the director's past tendency to paint female characters as martyred nags impatiently dragging their men toward adulthood.

This is 40 is notably messy, with narrative threads about which of the two employees (played by Megan Fox and Charlyne Yi) at Debbie's store has been stealing and about Pete's not very successful attempt to release a new album by Graham Parker and the Rumour drifting away rather than arriving at an end point. Sometimes that untidiness works for the film — both Pete's relationship with Larry and Debbie's with her largely absentee dad Oliver (John Lithgow) suggest lifetimes of complications that can't be resolved in a side plot — but the questions about artistic integrity and business that are raised in the collapsing of Pete's label are interesting and half-formed and could do with more exploration. Other elements, including older daughter Sadie's (Maude Apatow) constant burrowing into her phone and tablet, the revelation of a character's pill addiction and Jason Segel's presence as a self-congratulating personal trailer, don't really fit into any larger scheme.

Apatow's film comes across as overstuffed and understructured, a collection of elements that hasn't really been assembled into a story and could do with the backbone. Rather than set out to make a feature about middle age and marriage and family, it feels like Apatow would have been better served to focus on making a film about Debbie and Pete and their journey, one that would naturally touch on all those themes. When they have a very funny fight about their relationship in terms of who's Simon and who's Garfunkel, the potential of this material is clear, but the end product feels like a step forward in terms of maturity of subject matter and a step back in terms of filmmaking.