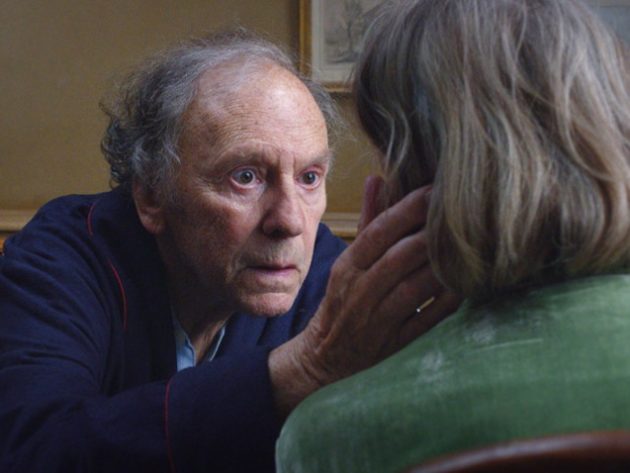 Austrian filmmaker Michael Haneke has a distinctively aggressive relationship with his audience that ranges from the provocation of Caché and The Piano Teacher to the outright antagonism of Funny Games and Benny's Video. Amour, his latest work and the winner of the Palme d'Or at this year's Cannes Film Festival, might be considered Haneke's version of a love story, and its grimness is of a much quieter but no less impactful sort. It is, more than any of Haneke's previous work, infused with compassion, but of a sort that cuts like a knife. For all that it is, as promised, about love, it's also a subtly punishing affair that grinds you into the ground as you watch an elderly couple deal with one member's slow deterioration of health and sanity.

Amour starts with firemen breaking into a beautiful Parisian apartment. The bedroom door has been taped up, and inside is the corpse of Anne (Emmanuelle Riva), lying on the bed, scattered with flowers -- and it's here that Haneke inserts the title card, to ensure you know that this will not be a syrupy tale. We cut back to when Anne was alive and living with her husband Georges (Jean-Louis Trintignant), both in their eighties. They attend a concert being given by one of Anne's former students — a trip that, with the accompanying streetcar ride home, marks the film's only venture out of the apartment, a location that becomes confining until it shifts into a sort of hiding place to dwell on the misery that life must end, and sometimes does so in messy, undignified failings of the flesh.

Riva and Trintignant are the latest in a long line of Annes and Georges that Haneke's presented over the years (the names have recurred in his films from 1989's The Seventh Continent through 2009's The White Ribbon) and perhaps the most fully realized — they are a couple with a deep connection and a long history together, one that includes moments of chilliness as much as devotion. They've been spending a comfortably bourgeois late life together, their middle-aged daughter Eva (Isabelle Huppert), a mother herself, periodically visiting from London where she lives with her British husband Geoff (William Shimell). Anne and Georges surely have some awareness that death is closer than it was when they were young, but when a first brush with mortality arrives, it does so in a frightening way that catches them unaware. Anne has a stroke or a fit, one that leaves her temporarily frozen — it passes before Georges can get help, but it's a sign of what's to come.

Haneke approaches the story with characteristic unflinching austerity that makes all the more difficult the unadorned scenes of Georges, frail himself, struggling to help Anne off the toilet after a surgery meant to help her instead leaves her unable to walk. Anne, afraid of doctors, extracts a promise from him that he will not bring her back to the hospital, and not long after asks for death. "There's no reason to keep on living," she tells him. "Why should I inflict that on you or me?"

In the moment, it feels harsh and defeatist — at that point Anne is suffering only from manageable mobility problems, and while life will be different, it's still open to many of the same experiences. But Anne is not naturally suited to optimistically soldiering on, and prefers not to talk about what's happening to her to a visiting student or to welcome her son-in-law on a visit. And as things get worse from there, every intrusion into their increasingly difficult existence seems like an invasion, from the nurses who arrive to help care for Anne after another stroke leaves her paralyzed and unable to speak beyond nonsensical phrases. In one of the film's most wrenching scenes, Georges tries to lock Anne away when Eva comes to visit, not to protect his daughter but to protect Anne from her well-meaning but terrible child who sweeps in and demands to know what else can be done, having no real grasp of her parents' day-to-day of diaper changes, peach porridge and compulsive crying out ("Hurts! Hurts!" Anne yells), or that some things cannot be fixed, only endured.

"Life... so long," Anne mutters at one point in what may or may not be a moment of clarity. And the prospect of the days stretching out and only getting worse is heavy on this film, as the flesh fails and all that's left is the promise of waiting out the undignified end of existence. Haneke's dry-eyed, unsentimental approach makes what would have been, in someone else's hands, an agonizing ordeal a little more bearable, allowing for moments of relief when a semi-symbolic pigeon finds its way into the house, or a jolt of horror in a nightmare sequence. But the clinical distance Haneke manages so well also makes the film feel like a beautifully crafted but calculated exercise, one gentler and touched with more warmth than his earlier films, but still meant to be a shrewdly knowing knife to the viscera.