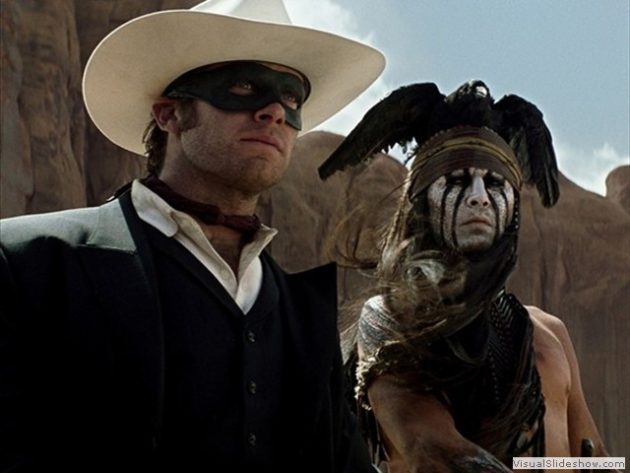 Can Johnny Depp and Gore Verbinski do for cowboys and Indians what they previously did for pirates? We'll find out soon enough, as today we have proof that the troubled, years-in-development new version of The Lone Ranger will actually hit theaters.

A new full-length trailer for next summer's The Lone Ranger hit the web today, and it's full of everything you've come to expect from the people who convinced us that the British East India Company operated in the West indies. It's definitely an original story, but it's also apparent that the film will treat the desert of west Texas with the same kind of cheesy awe that the Pirates films did the Caribbean, which is fine by me. The trailer shows us how Tonto and Kemosabe become pals, how the Ranger takes up the mask, and how the west Texas (actually, New Mexico) desert has some rather spectacular scenery.

Incidentally, despite seeing more of Armie Hammer's Ranger, I'm still getting the impression that Tonto is the main character. If that turns out to be the case, it'll be an interesting twist on the Anglo-centric
view of the old West.

So, will this be a hit? There hasn't been a successful filmed take on the character since The Lone Ranger and the Lost City of Gold in 1958, that film an extension of the popular TV series which ran on ABC from 1949 to 1957. The last theatrical attempt was the 1981 flop The Legend of The Lone Ranger, the less said about which, the better. And after the failure of Cowboys and Aliens, there's a real sense that Westerns tend to flop (Brokeback Mountain notwithstanding). It's probably more likely that boring Westerns flop, however. More importantly, Johnny Depp remains Johnny Depp to the point that even an underperforming movie like Dark Shadows still rakes in $239 million.

So what do you think? Fire off your silver bullets in comments.