The 'After Earth' International Trailer Features Future Monkeys, Explosions, And 2 Smiths For The Price of One 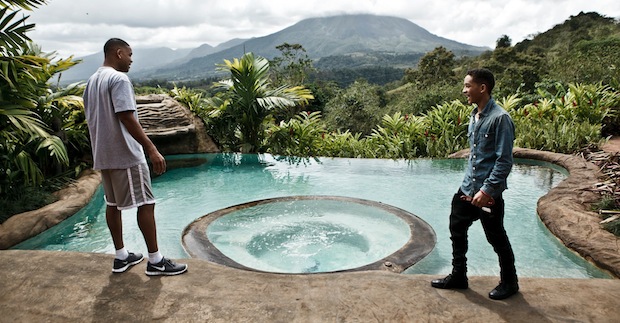 If, like me you're horribly old and ready to be sent by the farmer to the local dog food factory, you might remember a 1981 science fiction book called 'After Man: A Zoology of The Future,' by Dougal Dixon. Now sadly out of print (I still have a battered copy with a half-torn cover, because bragging rights), it featured fantastic naturalist illustrations of creatures extrapolated, evolutionarily, from modern fauna 50 million years after humanity had gone extinct. Wolf-like beasts descended from rats and ungulates descended from rabbits are the least weird creatures you'll see, and it's a crime no one has ever seen fit to make a half-decent movie based on concepts from the book.

We'll have to wait much longer for that, but based on the new international trailer, we can at least see something of the book's influence on M. Knight Shyamalan's next film, After Earth. The Will Smith and Jaden Smith-starring sci fi movie concerns the adventures of "legendary general" Cypher Raige* (Will) who, along with his young son Kitai (Jaden) crash land on planet Earth a thousand years after humanity abandoned it and moved out into the stars. Critically injured in the crash, the General is in desperate need of help; now Kitai must venture out alone into a completely re-forested home-world teeming with creatures, so we're told in the trailer, that have all evolved to kill human beings.

The glimpse of what looks like slightly evolved baboons is promising, and I'm actually shocked to admit this thing looks good. Shyamalan has not earned any benefit of the doubt, however, and I am confident that by film's end we'll be treated to some kind of clunky twist. Maybe it'll turn out that they're on the Planet of the Apes and that Jaden is actually Cypher's father.

Here's the trailer. Let us know what you think in comments.