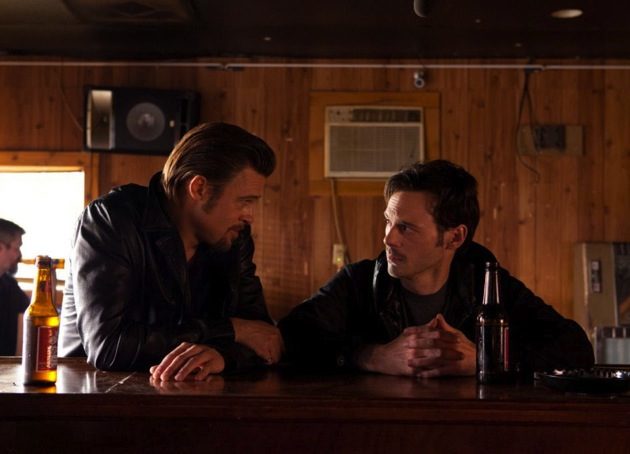 Were you auditioning for Frankie?

Yeah. I didn’t think there was chance in hell I would ever get it, which is what spawned the ludicrous accent I use in the movie. I was sick with the flu at the time, and I was complaining to my girlfriend, who’s my wife now, and she said, "Well, why don't you go in and do what you're doing there if you don't think you're going to get it?"  And I was like, "You know what?  You're right.  I'm just going to go in there and throw this against the wall."  Andrew just kind of fell in love with it and said, "I want exactly whatever you're doing right now.  I don't want you to polish or clean it up."  My jaw dropped. I was like, "Are you really giving me this job?"

The scene where you meet Brad Pitt’s character at the bar is intense. Your performance reminded me a bit of Dustin Hoffman in Midnight Cowboy. How did you prepare for that?

I put so much faith into Andrew Dominik's script, you know, and the bar scene spawned from character research and development.  Johnny Amato (Vincent Curatola) is a father figure to me.  He's the only person in that world that means something to me, you know.  Frankie doesn't have any friends.  He doesn't know anybody. And Jackie is asking me to rat out that person. It’s a big, big struggle for Frankie.

You make it pretty palpable onscreen.

Pitt really works you over psychologically in those moments. Is it intimidating to act against against him.

You know, I've never really gotten star struck. I'm always more intrigued by a person's art, but I guess you could say that I didn't know if I was going to be intimidated or not.  The first scene we shot was the bar scene, and I opted to not meet Brad before it.  I said, "I don't want to meet him. I don't want to talk to him. I don't want to introduce myself to him.  Let's take all this intimidation that occurs in the script and put it into the scene.

So, we didn't speak for the first two or three days of filming and then we both broke character. From there on out, we spoke a lot more and cracked jokes. It's nice to be able to meet him on a personal level as well, but I'm so focused on the work and doing a good job that there really isn't any room for feeling intimidated.

Your scenes with Ben Mendelsohn are also memorable. When I interviewed him, he told me that you two were the first guys on the set and really bonded.

Ben is a character, man. Even sitting in a chair in a hotel room, he's just constant entertainment.  I love crazy people, and I just stuck to him like glue right when I met him. But we took the relationship even further. We moved in together for like the last six weeks of the shoot, and the relationship you see on the screen is the relationship that we had at the house. We got in fights. We argued. He'd complain. We'd bitch. We brought everything that was going on at the house to work.

There's been some press about the "F" Cinema Score that Killing Them Softly and its disappointing box office. What do you have to say about that?

I know it got squashed, but Andrew Dominik is one of those directors like Terrence Malick. It doesn’t makter how much his movies make. As an actor, I can tell you that actors fucking love him a a filmmaker. Probably 50 percent of the actors I know would name The Assassination of Jesse James By The Coward Robert Ford one of their favorite films. I wish the movie had better for Andrew's sake, but he could call me tomorrow and I would take his movie over a studio movie any day.

You know,  I didn't even recognize you in Argo because, I swear, every guy in that movie looks like David Cross. But you shot that after Killing Them Softly, and I hear that Dominik recommended you to Ben Affleck.

Every guy in that movie did look like David Cross, and Andrew Dominik did call Ben Affleck and told him he'd worked with me. They're super close because Ben's brother Casey was in Jesse James and Ben and Andrew are big fans of each other's work.

So what's next for you?

I've got about two or three scenes in Promised Land that just came out. And then a movie called Twelve Years A Slave that Steve McQueen directed. Brad's in it, and Michael Fassbender and Chiwetel Ejiofor. I'm working on this film right now with Liam Neeson and Julianne Moore called Non-Stop. Then I'm off to do this movie called Frank with Domhnall Gleeson and Michael Fassbender. And after that, I work with David Michod, who did Animal Kingdom and is really close friends with Andrew Dominik. It's with Guy Pearce and Rob Pattinson. It's called The Rover.

Is it going to be as intense as Animal Kingdom?

You know, I don't know the direction in which David's taking it, but it's a futuristic western that takes place in the Australian Outback.

Can you talk about the character you play?

I play Rob's brother. If I say anything else about  it, it gives it all away.

You've got a lot of work coming up. Have you ever thought about directing?

Storytelling is essentially what has always drawn me to this business.  So, yes, absolutely.  I've been writing a script for about a year that I'm tweaking and polishing.  So, I'm hoping that I can shoot it soon, maybe next December. I want to keep it super low budget, under a million bucks.  As a producer, I didn't get to be as creative as I wanted to be, and I realized that directing is where a lot of the storytelling takes place. And so that's definitely I want to explore.