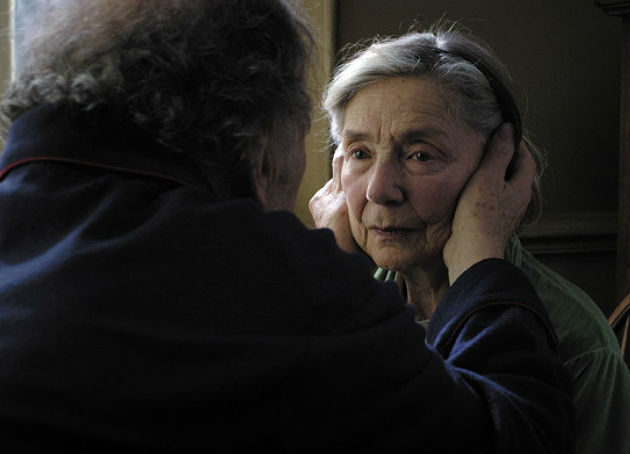 After so much Zero Dark Thirty domination from the New York Film Critics Circle, their West Coast counterparts in the Los Angeles Film Critics Association made a splash with more art house-leaning picks, voting Michael Haneke's Amour the best film of 2012 — technically a foreign language entry, though Leos Carax's Holy Motors earned that honor. (I see what you did there, LAFCA — and I like it.) LA critics also showed love for Beasts of the Southern Wild, whose non-professional actor/NOLA-area baker Dwight Henry earned a Best Supporting Actor nod, launching his awards season prospects.

Get the full winners after the jump along with results from today's awards announcements from the Boston Society of Film Critics and the New York Film Critics Online groups, both boosters of Kathryn Bigelow and Zero Dark Thirty...

Not all of LAFCA's picks are watertight, IMO (Frankenweenie over ParaNorman? Oh, fine...) but the organization deserves massive kudos for going against the grain with the majority of their awards when every other critics group so far has played it so safe.

Among LAFCA's greater surprises, which please me greatly: Love for Beasts of the Southern Wild's Dwight Henry, who's magnificent alongside Quvenzhane Wallis (who's also got some solid Oscar buzz of her own going, at just 9 years old); Roger Deakins' win for Skyfall, which elicited cheers from his boosters during LAFCA's 5-hour-plus voting meeting; the fact that Joaquin Phoenix's snarly, gnarly turn in The Master was recognized amid a season of Daniel Day-Lewis-Lincoln adoration — and that the runner-up for Best Actor wasn't even DD-L, but Holy Motors' Denis Lavant.

LAFCA also gets points in my book for refusing to let buzz dictate voting, even if Amour's Emmanuelle Riva had to share the win with Silver Linings Playbook Oscar front-runner Jennifer Lawrence, and despite the fact that even in naming Anne Hathaway a Best Supporting Actress runner-up for Les Miserables they also tacked on her turn as Catwoman in The Dark Knight Rises.

Meanwhile, as if one five-hour critics award deliberation live-Tweet wasn't enough to occupy a Sunday afternoon, the Boston critics also announced their awards, which yielded some surprising love for Perks of Being a Wallflower:

Of note here: Argo winning the "Best Ensemble Cast" award is probably indicative of how things are going to go for Ben Affleck's real-life political thriller now that Kathryn Bigelow's Zero Dark Thirty has stolen all of its thunder.

It's also interesting to see how both Boston and NYFCO choose to honor film music with the award for "Best Use of Music," which opens the category beyond just score or soundtrack; Benh Zeitlin's original Beasts score is a wonderment in itself, but how do you compare it to Quentin Tarantino dropping a Rick Ross track into his Southern slavery exploitation homage?

Let's hear what you have to say, Movieliners. Who's with me in awarding LAFCA the award for Best Sunday Afternoon Critics Award Voting Results?