Let's not bother talking about how Alexa Vega went from 13-year-old Spy Kid in 2001, to a hot hit-woman, wearing only a bra and chaps in the forthcoming Machete Kills in the blink of an eye (yes, you're old, and that was over a decade ago).

Or that Robert Rodriguez, who directed the 24-year-old Vega through adolescence into her teen years in three Spy Kids pics, is probably not pervy at all, despite casting his former child actress as a sexy body-baring femme fatale in his tongue-in-cheek action sequel.

If anything ,it's you and I who are the pervs, sitting here, unable to stop our brains from instantly juxtaposing this first-look image at Vega (via Vega's Twitter account) as Killjoy in Machete Kills with fuzzy memories of her from those bygone Spy Kids days. (It's even worse if you remember Vega's first film role, as Icebox's cousin, Priscilla, in Little Giants.) 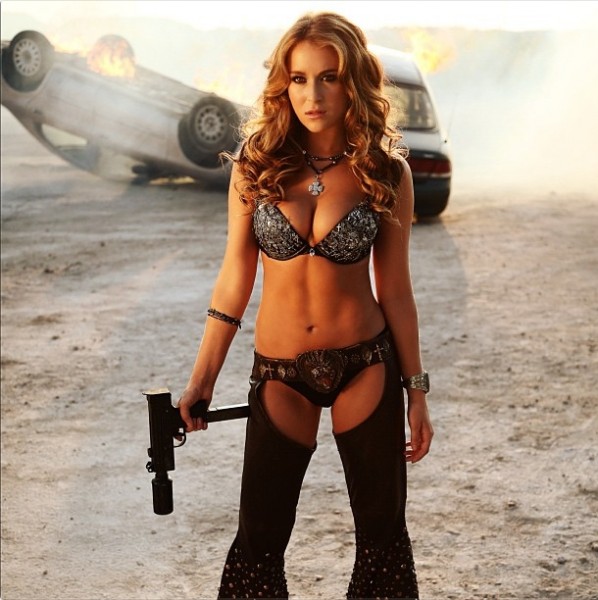 The thing is, any child actress growing up in the business has to deal with this sort of thing at one point or another, and Vega has been steadily working in the indie world for a good decade-plus. Why shouldn't she get to flaunt it? It's the association with Rodriguez that gets that cognitive dissonance firing, but I suppose that might only help her performance as a Rodriguez Femme Fatale, a la Salma Hayek, Michelle Rodriguez, Rose McGowan, and Jessica Alba - the kind of screen siren whose sultry sensuality is her most lethal weapon, aside from her actual lethal weapons, which in this case, appear to include guns and cars on fire.

Hats off to Rodriguez for going there, I guess. If you need me, I'll be in the corner wrapping my brain around this madness, watching the internet explode in "Alexa Vega Is All Grown Up, WINK WINK HEHE" headlines.