Kristen Stewart has a big Grauman's Chinese Theater Hollywood premiere this weekend and vampires are no factor. That didn't stop legions of teens from lining Hollywood Blvd to catch a glimpse of Stewart (and who knows who else) who is starring along with Garrett Hedlund, Sam Riley, Kirsten Dunst, Amy Adams and Steve Buscemi in Walter Salles' stunning On the Road, screening as a Centerpiece Gala at AFI Fest where it is having its U.S. premiere.

In the film version of one of the most celebrated works of 20th Century American literature written by Jack Kerouac, Stewart plays the unconventional free-spirit Marylou, the former wife and still frequent lover of Dean Moriarty, a fast-talking charismatic with an insatiable libido. Dean and best friend Sal (Sam Riley), a young writer whose life is shaken after Dean's arrival, take to the road. Marylou frequently accompanies Sal and Dean's travels across the country in adventures fueled by sex, drugs and the pursuit of the "It" - a quest for understanding and personal fulfillment.

Stewart spoke with ML during the Toronto International Film Festival where the film had its North American premiere. She shared thoughts on her character's "hard love," how she grew in being a part of the film and how this was the "biggest experience" she's felt on a set.

So what was your road to On the Road?
I was 14 or 15 when I first met Walter Salles. I spoke to him when I was 17, I think I may have shot the first Twilight, I'm not sure — possibly I was about to go do it. At first I was talking about playing another part, so it's been a long time coming. I don't know how I was able to get around that kind of energy, but to convey that I loved this thing in the way [Walter Salles] does and as soon as you get around that energy it passes between you, nothing really needs to be said. I got the job on the spot, and I drove away just vibrating. I was like, 'Are you kidding me?' Plus I was very young, I wasn't quite old enough for the part yet.

When I read the book many years ago, I found it sprawling and didn't seem to have elements that would make it translatable to the screen — at least I remember thinking that at the time. What did you think of the book when you first read it?
I was reading it for school, so I had to read it. I did independent study when I was in high school. I remember, I took so long to read the book. All I had to do was read it and write a report, it wasn't like I had to do an intensive study of the book, and it took me months and months — I was late. But, I think my teacher was OK with it because I think ultimately the paper was good.

But, people say it's different when you read it at different ages — but for me at the time, it was fun! At that age you start realizing you have a choice in who you surround yourself with. Up until that point, you're just around circumstantially who you're with — your family or whatever — but at that point you can start choose your family, and I've got a great family by the way. But I mean just the people you decide to surround yourself with. I don't want to sound cliché, but people should pull something out of you that would otherwise remain unseen.

And when I read the book I thought, 'Gosh, I need to find people like that.' I'm definitely not [my character, Marylou's] type. As I continued reading it and got older, the weight of it started to mean more. I was totally enamored by the colors and the way he wrote it and jumped over words and how it read like a song. Then when I did the movie, to play a part like Marylou — she's very vivid. She's very colorful and interesting and on the periphery so you don't know how and why she can do the things that she does.

By the time it came to bringing it to life, I didn't want to play just a crazy, wild sexy girl. I wanted to apply all the whys and get to know the people behind the characters. There's a weight to it. It's not easy to live a life like that. That's what makes these people kind of remarkable. It's a give and take. There's no way to have this without pain, but they're not frivolous, they can feel it…

Marylou's a forward thinking progressive soul, but she's also surrounded by this situation with her ongoing yet ever-changing situation with her ex-husband, Dean, who is still an emotional roller coaster, both for himself and her. Did you ever judge her in respect to why she'd tolerate him for so long?
No, I never had done so. I always wondered how she could take it. How deep is that well? How much can you give and how much can you let be taken from you?

What I found about her is that she's very unique to her time, but nowadays she'd be something else. Her capacity to see everyone's flaws and appreciate them is really unbelievable. Any interview we did with anyone who was involved with them [before doing the movie] always said the same thing — that she was such a wonderful woman. She's infectiously amazing. So, no I didn't judge her.

So then, how would you describe the relationship between your character, Marylou and Dean?
They really are simpatico. It's tumultuous. It's hard to love like that. But they're so in love with each other. You don't know this from reading the book, but they stayed lovers until the end of his life. He kind of raised her and she always had a place in his heart, though I think the capacity was so enormous that there were also others in that heart, but she was at the center. And the same goes the other way around. I think they helped each other grow up and they raised each other.

How do you hope your Twilight fans will approach seeing this movie? Undoubtedly some will be curious to see you doing something outside of Bella and this may be for many their first chance. How do you hope they'll approach seeing this film?
Well, I mean you just walk into a theater [laughs]… I think if I can have anything to do with just one person that would not have otherwise read On The Road, then that would be incredible and I'm very happy to be a part of that.

I think that if you have any inclination of seeing this being a Twilight fan, I have to say I don't have much control over the things that I choose because I do need to feel compelled to do the roles that I do. I very rarely tactfully think about my career and how people are going to perceive it and I think that's what people appreciate and if that's not the case, then it's kind of like — um, that's not going to go away. It's a false thing. I think people will really like it and if you didn't like the book, then don't watch the movie. You know what I mean? However anyone wants to interpret it is all good with me. 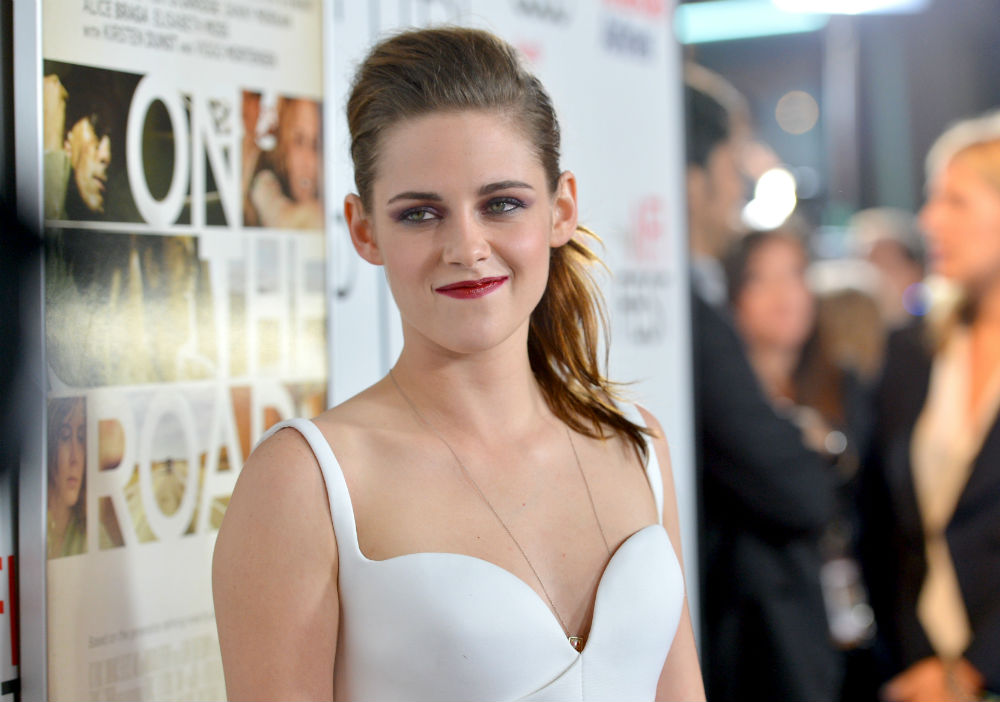 Above: Kristen Stewart premieres On The Road at AFI Fest

People describe On the Road as a "watershed moment" in American culture in that it upended the strict conservative culture that prevailed in the 1950s in the U.S. So from your perspective as a 20-something, how do you see it as relevant culturally today?
I think this is a good time to see this story visually because most people can watch it and not be shocked by it as they might have before. Back then, it would have been so shocking to see people doing drugs and having sex that they wouldn't have seen the spirit behind it — the message behind it would have been [diluted].

Though, maybe it would have been good because it would have forced people to look. But maybe they weren't able to yet. There's always going to be conflicting intuitions that might not even go together, but these are people who have the strength to be OK with people disagreeing.

At that stage of your life, there's so much ahead of you — at least it feels that way. The reach is so important even if something is unbeknownst to you, but you feel compelled to find out what it is… Don't ignore it! At that age, it's important to have a faith in feelings you can't articulate because at some point you need to hold onto them. And these guys found a word for that, it's the "It" and I don't think that's ever going to go away.

So what is that "It"? How would you describe the It?
[Laughs] Trust me, we've talked about that so much… It's the pearl. It's that thing that makes your life bounce. I think if we knew it… I honestly think it's an individual thing, but if something is funny to you and you're alone you can smirk at it or whatever, but suddenly if you're with a lot of people that also find it funny, you can be hysterically laughing. There's something about life that you can't completely describe. It also goes along with not ignoring that burn and going, 'OK, I'm content right now to be smart and conservative and hold onto what I've got.' I just think it's important to keep going for it.

How has your experience playing Marylou or in On the Road generally influenced your life professionally or personally? You said you've been a part of this project for a long time, so you've had quite a turn at experiencing this culture even as you took on other roles including, of course, Twilight.
It was the most time I've ever spent feeling. Twilight was a good five years and was a very indulgent creative experience. [Most projects] are usually only about five weeks, three months or six months tops. But because I was attached to On the Road so long, the build up and pressure inside by the time we go there was just bigger than anything I've ever felt on a set.

We had four weeks of proving that we were so thankful and happy to be there because we're all fans of the book, but we had put in the work and we knew the purpose and the weight of it and how so important it is to so many people. It's all to Walter [Salles'] credit, but if anything, what this has taught me is that if you stop thinking and just breathe through it, you're such a better actor. You just have to put in the initial work and then not become too analytical because you have to trust that you've already done it all.

So it's opened me up in a way that's appropriate to my age. I'm just a bit less inhibited. Just being able to not think so much before you speak is good. It has helped me in that way. It's not being less shameful, it's just being so much more unabashedly myself. I think that all started when I was 15. I can be around people and say what I think and have a conversation with a stranger and it's all good.

Read more on On The Road here.