Someone involved in the making of Cloud Atlas is a fan of Elvis Costello. In the story thread where publisher Timothy Cavendish (Jim Broadbent) and a group of like-minded seniors plot their escape from the old-folks home where they've been imprisoned, the woman of the group, actress Amanda Walker, introduces herself in one scene as "Veronica Costello."  That alone might not be enough to make a case for Elvis worship, but soon after the introduction the group of conspirators make a toast to "Trust." 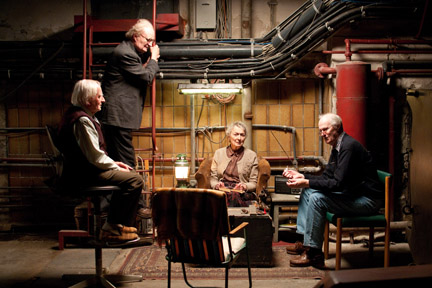 If you're a Costello fan (like me), you know that "Veronica," from the 1989  album Spike is a song that Elvis wrote — with a little help from his friend Paul McCartney — about his grandmother, who suffered from Alzheimers Disease. (It also happens to be his highest charting single in the U.S.)

Although Veronica Costello in Cloud Atlas seems pretty lucid, but the music video for "Veronica," which I've posted below, was also set in a nursing home, where the white-haired woman of the title is reminiscing about her life.

I can't find any evidence of who portrayed the elder Veronica in the Costello video, but I spoke to a representative from the London-based talent agency that represents Walker, Michelle Braidman Associates, and she assured me that the actress does not appear in "Veronica."  (Although Walker does bear a slight resemblance to the other Veronica, she's clearly younger.)

As for Trust, it's the name of Costello's fifth album, which he released in 1981. It's also one of his best, although it's several shades more cynical than the righteous heart of Tom Tykwer and the Wachowskis' Cloud Atlas. Then again, aren't cynics simply frustrated romantics? Everything is connected.