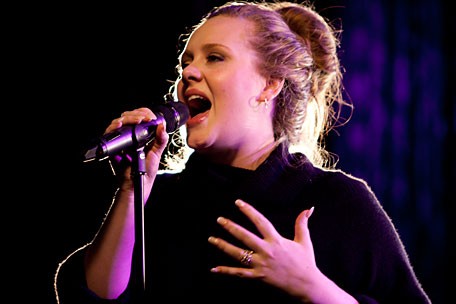 James Bond may be able to tussle with the world's most notorious evil-doers, but he's not able to resist the alluring sounds of singer Adele's soulful voice. 007 star Daniel Craig said that he cried when he first heard the theme song to Skyfall.

In an interview with Yahoo! Movies U.K., the Bond star said he was moved emotionally when he heard the first notes of Adele's ballad.

"I cried," he said. "From the opening bars I knew immediately, then the voice kicked in and it was exactly what I'd wanted from the beginning. It just got better and better because it fitted the movie. In fact the more of the movie we made, the more it fitted it."

Skyfall director Sam Mendes said that the Rolling in the Deep singer was given an early copy of the script to help her compose the song, co-written by Paul Epworth.

"She came in very early before we started shooting and her main concern was 'I write songs about myself, how can I make a Bond song? My answer was 'just write a personal song'! Carly Simon's 'Nobody Does It Better' was a love song," said Mendes.

Skyfall headed to the number one spot on iTunes only ten hours after its release. Adele recorded the song at London's Abbey Road Studios, featuring a 77-piece orchestra.

"I was a little hesitant at first to be involved with the theme song for 'Skyfall,'" Adele said. "There's a lot of instant spotlight and pressure when it comes to a Bond song." And the song has already lured some notable covers. Artists Jedward and Willow Smith have given their spin to the catchy tune.

Skyfall had its World Premiere in London Wednesday and will open in the U.S. November 9th.